UC Cooperative Extension in Humboldt County has invited local cannabis farmers to meetings this week to discuss ways to reduce the industry's environmental impacts, reported Will Houston in the Eureka Times-Standard.

UC advisors and specialists will discuss future research aimed at reducing the impacts of pesticide and fertilizer use on cannabis grows. UC Cooperative Extension advisor Deborah Giraud has called a meeting with Humboldt County cannabis growers to discuss the industry's environmental impacts.
The reporter talked to Deborah Giraud, UCCE advisor in Humboldt County, who said federal laws prevent UCCE from handling cannabis plants in their studies, but they are still able to test areas around cannabis grows for issues like pesticide runoff and soil and water quality.

At this week's meetings, Giraud said, "Mostly we just want to listen to folks who come to the meetings ideas and concerns. They're on the ground. We just want to know what could be planned with us."

The Buzz About Honey Bees and Marijuana

Extension apiculturist emeritus Eric Mussen of the UC Davis Department of Entomology and Nematology, "retired" in June of 2014 after 38 years of... 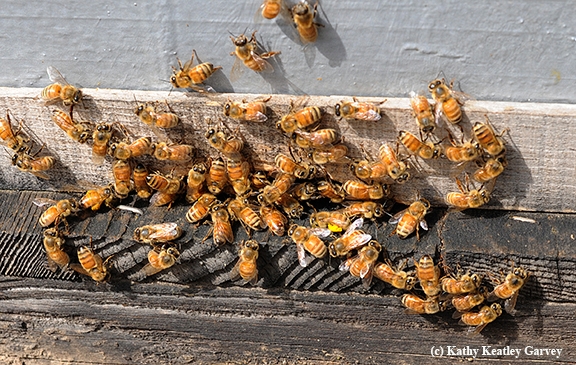 Mourad Gabriel with a CA fisher

Rodenticides used on illegal marijuana farms have already been shown to pose serious harm to the fisher—a cat-sized carnivore found in forests across Canada and four regions in the U.S. (Previous news article.)

Mourad Gabriel, a doctoral candidate with the Veterinary Genetics Laboratory at UC Davis School of Veterinary Medicine, provides a more comprehensive look at the situation in the recent issue of The Wildlife Professional, put out by The Wildlife Society. (Article here.)

New information looks at risks to other species and to the ecologists and biologists conducting wildlife research on community and public lands where more of these crops are being cultivated.

There is also a link to a video that offers a first account visual representation of what a fisher looks like, the unfortunate visual effects of toxicosis and the realistic outcome to wildlife from these illicit activities on tribal and public lands.

Evidence of rodenticide poisoning of wildlife found in the Sierra

There is a new predator in the forest these days. It has arisen quietly over the years. Any wildlife feeling hungry when they come upon it in the Sierra is vulnerable. This predator is amazingly small for the scope of its damage; it can’t run fast or climb high. Rodenticide bait pellets (bright green) with plant fertilizer dispersed around 2,000 plants in a northern California marijuana grow site within the northwestern California fisher project boundary.
This new predator is rodenticide in pellet form, used in violation of all safe-use regulations in our national forests by large-scale marijuana growers. Rodenticides are being used to protect young and tasty marijuana seedlings from wildlife roaming through the forest looking for a meal. Chemicals never meant to be used more than 50 feet from homes are now scattered across forest hillsides. Piles of poisons are left around hundreds of plants even though only a few pellets can be lethal. Miles of water pipe are lined with these pellets to protect the stolen water source. Camps are circled with pellets to protect human food sources and sleeping areas.

University of California scientists originally became aware of this problem when Rick Sweitzer, associate professor in the Department of Environmental Science, Policy and Management at UC Berkeley, and his wildlife research team retrieved a radio-collared fisher whose cause of death was unclear. Sweitzer and his team are researching are studying the fate Pacific fishers as part of the Sierra Nevada Adaptive Management Project (SNAMP).

Necropsy (an autopsy for animals) of the fisher carcass by Mourad Gabriel of UC Davis and the Integral Ecology Research Center found rodenticide poisoning to be the cause. With these new findings, the livers from previous fisher mortalities in the SNAMP study were reexamined for evidence of rodenticide exposure. They discovered that more than 80 percent of dead fishers examined had been exposed to rodenticide. These toxicants can persist in animal tissues or the environment for potentially hundreds of days. At least five dead fishers found by researchers in SNAMP and a second fisher study in northern California have been confirmed to have died of rodenticide poisoning, the scientists reported in the science journal PlusOne.

Considering the hundreds of marijuana grow sites found every year on public lands, the scale of the damage to California’s natural resources may be unprecedented. Grow sites are also found containing massive amounts of fertilizers, herbicides and pesticides, all of which are being used without concern for run off or aquatic species nearby. Marijuana plants are removed from these plots when found, but these chemicals are often left behind.

Although this problem might seem overwhelming, there are efforts to address it. The non-profit Environmental Reclamation Team has cleaned up hundreds of grow sites since 2005. They remove and document all of the poisons found along with the miles of plastic irrigation line and piles of trash. More efforts like this are needed if we are to maintain rare animals like the Pacific fisher as well as all the other species who have the potential of coming in contact with these poisons.