How to attract bug-eating birds to farms

The authors glued codling moth cocoons to walnut tree trunks and covered some with cages that exclude birds to test the effect that bird predation has on controlling moth pests. If moths emerge from cocoons, they produce larvae that feed on the nuts the following spring, causing significant and costly damage to the crop.

“Permitting bird access to cocoons during the wintertime increased codling moth predation from 11% to 46%, and predation increased with an increasing amount of natural habitat within 500 meters (one-third mile) of the orchard,” the researchers wrote. Long was not surprised by the finding. She often walks in her family's almond orchard, where a large hedgerow of native California plants grows on the field edge.

“When I walk past the hedgerow,” she said, “I hear birds singing. I see white-crowned sparrows, goldfinches and mocking birds. It's so alive. It's really important to provide habitat to ensure birds have a place to live on farms.”

Songbirds are voracious predators of bugs, including aphids, whitefly, scale, caterpillars, ants and earwigs, especially early in the season when they are feeding baby birds.

Heath said they were surprised to find that the walnut orchards also provided habitat for birds. Woodpeckers and codling moth reduction were highest in orchards where big, old walnut trees were retained. Western bluebird eating a caterpillar pest. (Photo: Glenn Bartley/VIREO)
“Birds like crows, that can damage crops like walnuts, are not cuing in on hedgerows, they're cuing in on the crops,” Long said.

Maintaining hedgerows of native plants on farms has the side benefit of attracting natural enemies and native bees for better pest control and pollination in adjacent crops.

Long is a technical advisor to the Wild Farm Alliance, which, with Heath and Sara Kross, recently published a book on birds' role in pest management. The book, Supporting Beneficial Birds and Managing Pest Birds, is available for free download from the alliance's website. A recording of a webinar on the same topic can be viewed at eOrganic.

Heath is now a biodiversity post-doctoral fellow at the Living Earth Collaborative in Missouri.

Read more about Long and Heath's research on bird control of codling moth.

Read the research report in the journal Ecosphere.

Read about habitat for attracting natural enemies for pest control. Birds are beneficial too!

Across the globe, scientists have shown that birds can be farmer allies. Insectivorous birds feed on damaging insect pests in many crops including coffee, cacao, oil palm, corn, cabbage and apples. Raptors, including hawks and barn owls, feed on rodents, including gophers, voles and mice (see blog, Barn owls help clean up rodents naturally).

Despite this deep historic knowledge that birds are important predators of crop pests, over time the perception of birds as natural enemies of pests has been generally replaced with the idea that birds are often major crop pests themselves. Indeed, some bird species — like some types of insects — can cause trouble for farmers, but many others — especially those that eat insects and rodents — can be beneficial. Birds are voracious predators of codling moth pests in walnuts

Codling moth is a major worm-like pest that infests walnuts, apples and pears. The larvae go dormant during winter, living in cocoons in crevices in trees. Adult moths emerge in the spring, lay eggs and infest crops. Codling moth larva feeding on walnuts. During winter, the larvae form cocoons under bark flakes and in crevices of orchard trees.

We evaluated bird predation of codling moth using “sentinel prey” and exclosure cages. We glued codling moth cocoons to walnut trunks and covered them with cages, allowing insects and spiders to access the cocoons, but not bird predators. This allowed us to count how many larvae were eaten inside and outside of the cages to estimate pest reduction by birds. What did we find?

Natural enemies, like parasitic wasps and lacewings, alone reduced codling moth larval numbers by 11%; adding birds into the pest control system reduced them by 46%! Nuttall's woodpeckers and white-breasted nuthatches did a lot of the work; these birds travel up and down the trunks of trees, searching for insects.

Above, a white-breasted nuthatch preys on a codling moth larva “sentinel cocoon” on a walnut tree. Video by Sacha Heath.

Alfalfa weevils are no match for insectivorous birds

Alfalfa weevils are key pests of alfalfa, reducing yields and hay quality if left uncontrolled. Dr. Sara Kross looked at bird predation of this pest by excluding birds from alfalfa plants via cages, and counting the number of weevils inside and outside the cages. She found that birds reduced the number of weevils by more than 30%, showing their importance in helping to protect alfalfa from this serious pest. Yes! Hedgerows are important habitat for beneficial birds, serving as nesting, foraging and roosting sites. In a study in the Sacramento Valley, crop margins with hedgerows, tree lines and riparian buffers harbored up to six times more birds and up to three times more bird species than bare or weedy margins.

Walnut orchards adjacent to hedgerows and riparian areas had higher numbers of beneficial birds along with more species. In alfalfa, there were more beneficial birds in fields when at least two tall trees were present along the field edges. More beneficial birds were associated with better pest control, that is, fewer codling moth cocoons and alfalfa weevils. Birds have large territories, fly long distances, and are influenced by what happens on the farm as well as by what happens in the landscape around the farm. For example, we found that codling moth predation by birds greatly increased in walnut orchards as the amount of habitat in the landscape around the orchards increased (including hedgerows, tree lines, riparian and oak woodlands, and grasslands). Will hedgerows increase the numbers of pest birds?

Pest birds are present on farms regardless of field edge habitat (such as weedy vegetation or hedgerows). Cases will be different, depending on the crop, but in the fields and orchards of Yolo County, researcher Hillary White (formerly with UCCE and now with U.S. Fish and Wildlife) found that three of the most common avian crop pests (American crow, red-winged blackbird and Brewer's blackbird), were up to 10 times more abundant in agricultural fields with bare or weedy margins than in fields with hedgerows. What can I do to attract beneficial birds to my farm?

Our avian research team has been quantifying the conditions under which birds are helpful or harmful to growers. We are looking for ways to help farmers create bird habitat on their farms to harness the beneficial pest control services birds can provide, while also protecting crops from the damaging effects of some bird species. This information is available in the new publication “Supporting Beneficial Birds and Managing Pest Birds,” co-authored by the Wild Farm Alliance and Drs. Kross and Heath, and technically advised by UC Cooperative Extension and several farmers. This is a user-friendly guide for farmers and conservation practitioners, with the goal of co-managing farmlands for biodiversity and farming. Dr. Sacha Heath received her PhD from UC Davis's Graduate Group in Ecology and will soon be starting a postdoctoral fellowship with the Living Earth Collaborative in St. Louis, Missouri. 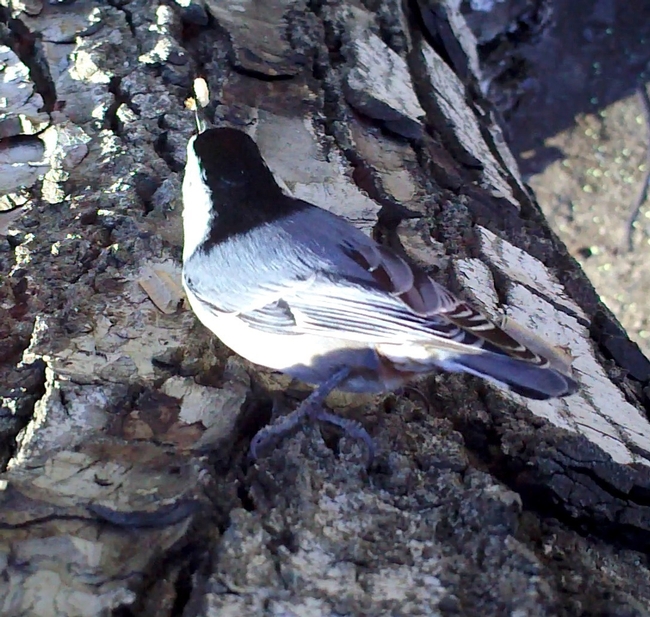 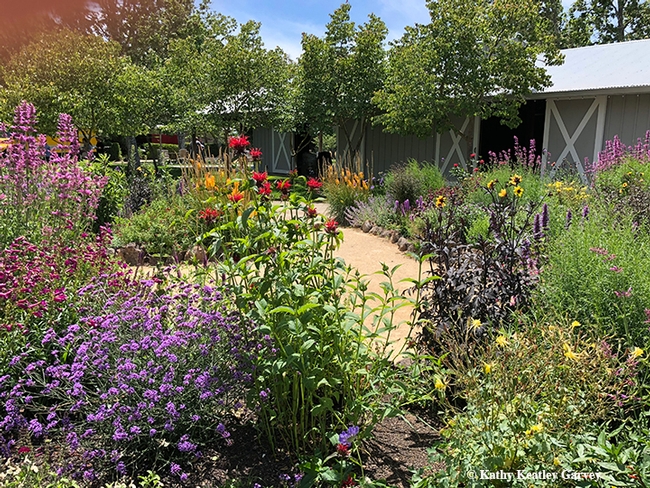 This is an overview of part of Kate Frey's pollinator garden at Sonoma Cornerstone. (Photo by Kathy Keatley Garvey)

This is an overview of part of Kate Frey's pollinator garden at Sonoma Cornerstone. (Photo by Kathy Keatley Garvey) 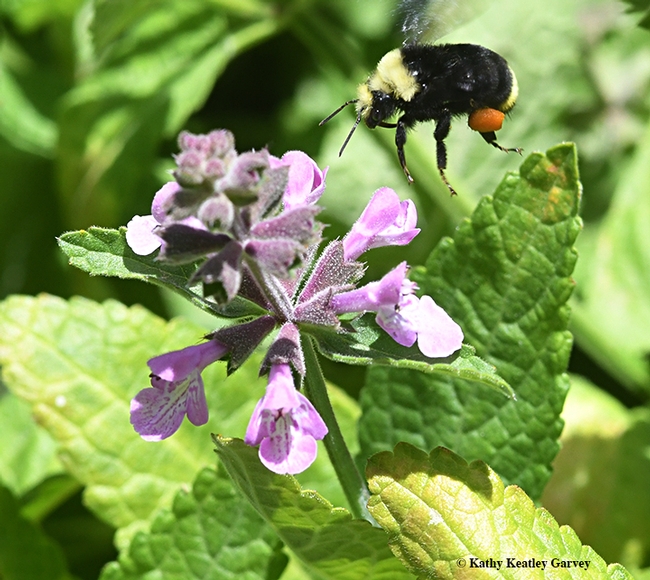 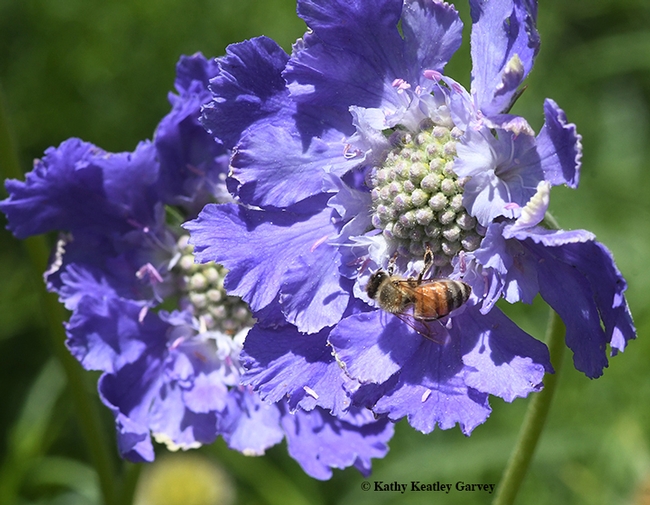 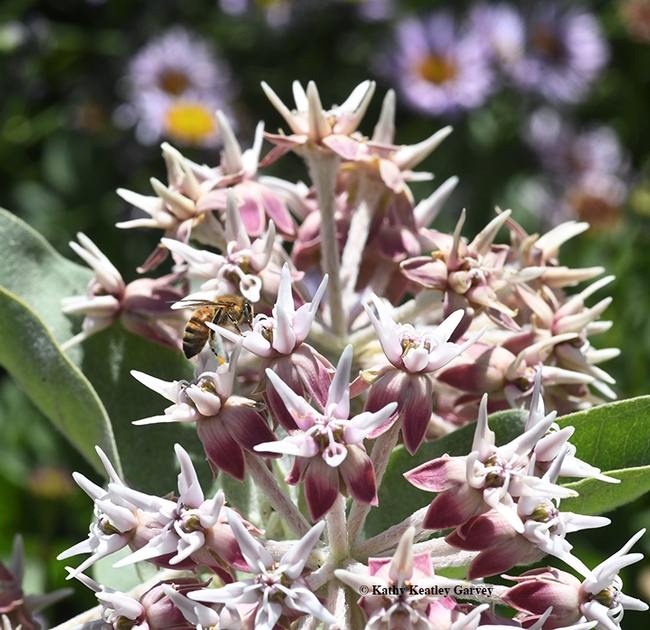 Milkweed is not only the host plant of monarch butterflies, but honey bees like it, too. This is the showy milkweed, Asclepias speciosa. (Photo by Kathy Keatley Garvey)

Coming in on a Wing and a Prayer

You've heard the expression, "On a wing and a prayer." It apparently originated during World War II. Remember the 1942 film,  "The Flying... A tattered monarch makes a refueling stop on a Tithonia in Vacaville, Calif. (Photo by Kathy Keatley Garvey)

A tattered monarch makes a refueling stop on a Tithonia in Vacaville, Calif. (Photo by Kathy Keatley Garvey) 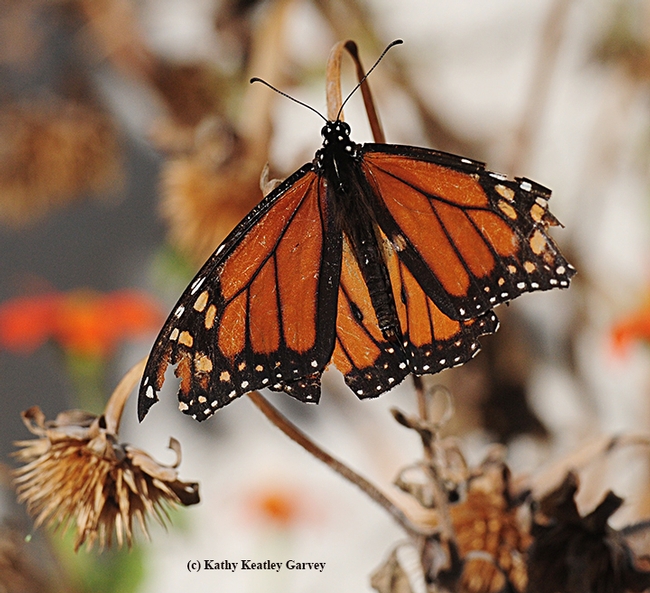 Wings are shredded and scales slashed, but this male monarch still flies. Here it pauses to soak up some sunshine. (Photo by Kathy Keatley Garvey)

Wings are shredded and scales slashed, but this male monarch still flies. Here it pauses to soak up some sunshine. (Photo by Kathy Keatley Garvey) 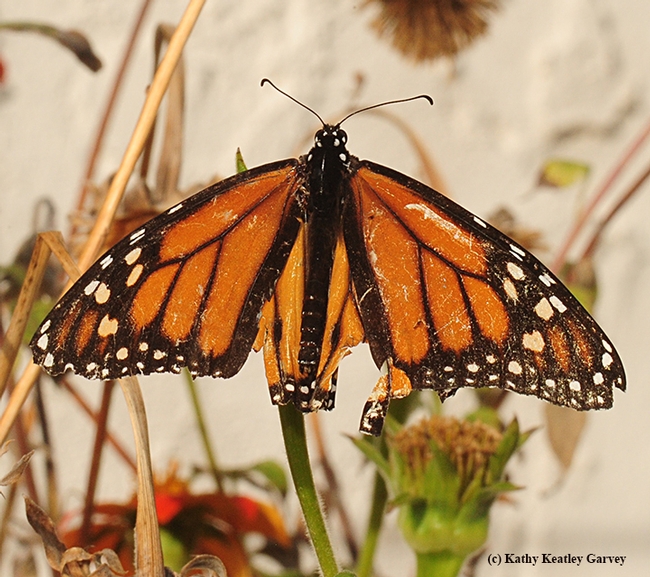 A predator missed--but a miss is as good as a mile. (Photo by Kathy Keatley Garvey)

A predator missed--but a miss is as good as a mile. (Photo by Kathy Keatley Garvey) 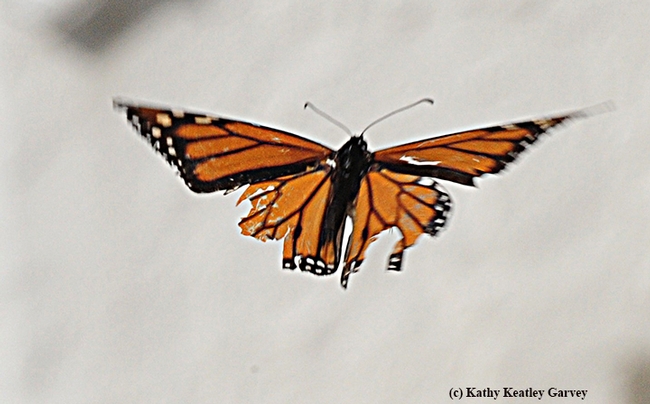 A migratory monarch, after sipping some flight fuel in Vacaville, Calif. takes off "on a wing and a prayer," heading for an overwintering site along the coast. (Photo by Kathy Keatley Garvey)

Pollinator Pavilion. Picnic Day. They go together like honey bees on bee balm and bumble bees on tomatoes.  When you attend the 102nd annual... Crowds peered through the 2015 Pollinator Pavilion enclosure and then entered excitedly. (Photo by Kathy Keatley Garvey)