Sustainability - what does it really mean? But even with the riveting debate, the question remains: What is sustainability? Is it focusing more on natural ecosystems? Is it being completely self-reliant, or turning only to organics? Is it focusing on a larger multi-national scale?

UC ANR has started holding a series of sustainability webinars to continue the conversation and tackle some of these questions. The first webinar took place on Feb. 15, 2013 with Tom Tomich, director of the UC Agricultural Sustainability Institute. The webinar tackled the issue of sustainability: What is it? Is there a sustainability science? What is at stake? The video can be seen on the ASI website.

The second webinar, on May 31, 2013 with Neil McRoberts, professor in the Department of Plant Pathology at UC Davis, focused on linking sustainability theory with practice. McRoberts addressed sustainability theory using formal models to plan and track extension outreach efforts, and linking interdisciplinary scientists. Though the webinar is not yet available online, it will be soon on the ASI website.

The next webinar is Thursday, June 13, from 10:00 a.m. to 12:00 p.m. Featuring Ermias Kebreab, professor in the Department of Animal Science at UC Davis, the webinar centers on environmental sustainability of animal agriculture. Topics will include: sustainability as a "wicked" problem, water quality and livestock production, and the mitigation of air emissions from livestock operations. The webinar is free and open to the public. More information is available on the Agricultural Sustainability Institute website.

Sustainability is a complex issue. These questions about the definition and concept are not going to be answered overnight. But as long as these types of conversations and learning opportunities continue to take place, I'm confident we'll continue adapting and meeting the complex challenges with which we are faced.

Nominate a leader in sustainable farming

The award recognizes and honors individuals who have exhibited the leadership, work ethic and integrity epitomized by the late Eric Bradford, a livestock geneticist who gave 50 years of service to UC Davis, and the late Charlie Rominger, a fifth-generation Yolo County farmer and land preservationist.

Nominations are welcome for UC Cooperative Extension advisors and specialists as well as UC Davis graduate students, faculty members, and in special cases, alumni, for their work toward agricultural sustainability.

Award recipients receive a cash prize and may be invited to give a lecture hosted by the institute.

Nominations are due by Jan. 2, 2013. To nominate a leader in agricultural sustainability visit the ASI website.

The Bradford-Rominger award recipient will be announced in spring 2013.

Learn more about the award from last year’s recipient. Boost sustainability by eating low on the food chain

Some people believe eating low on the food chain is one way to help preserve the environment. And, in fact, livestock production consumes much more land and other resources per calorie than the production of plant foods.

A story on the website Bohemiam.com suggests it also makes sense to eat insects for improved dietary sustainability. Insects and other arthropods constitute an edible resource of tremendous biomass, the article said. Ants alone reportedly make up about a third of all terrestrial animal biomass.

Writer Alistar Bland got information for his story about the consumption of snails from a UC Davis website. Mainly known as a garden pest, snails were introduced into California from France in the 1850s as a food source. Snails may be sautéed in butter and garlic and served in the shell.

An eight-page UC publication is available for $1.50 from the UC Agriculture and Natural Resources catalog with instructions for raising and preparing snails for food. 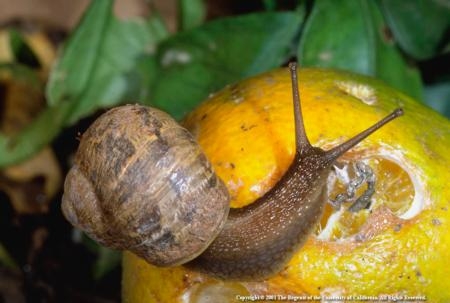 Common garden snails can be a sustainable food source.