A Gardening I Will Go-I Think?

According to all the garden catalogs that come my way, it’s time to “replant, repot, rejunenate “the front yard.  According to those same catalogs, it will cost merely a gazillion dollars for the plants, bulbs, corms, and tubers to accomplish this transformation; and don’t forget about the soil amendments, and fertilizers the folks also want to sell you.  Yeah right, I have that kind of money to use as walking round cash!  Don’t you?

This year, the front yard lost all the glorious shade that came from the late, great green ash tree that stood for 20 plus years.  It’s been interesting to watch the various shrubs and bushes getting acclimated to more sun, less shade.  The oleanders made the transition beautifully, but of course, have you ever seen an oleander suffer from the sun?  They are now rather happy campers in the hot afternoon sun, bowing gracefully in the Suisun City gale that passes for gentle winds.

The buddleia in the ground near the front door went from full leaf to rather skimpy foliage, but made a roaring comeback – full of blossoms and hummingbirds.  The buddleia in the pot, however, is still trying to find a way back from “roasted”, but is managing to hold on until cooler weather when it goes into the ground itself by the side yard gate.  It gets water and encouraging words for the efforts!

The other succulents in their cozy pots that are placed around are thriving and growing like weeds, which is why some of their offspring will be at the plant exchange next weekend thanks to new Master Gardener Elizabeth!  The new Heucheras that were on the front porch in the shade have taken their temporary places in pots at the edge of the early afternoon semi-shade and the afternoon pure sun.  They got set there to find out just how well that spot would suit them.  Hurray! They are doing very nicely and I think that area will be their “forever” home.

The only plant that is not really happy with the loss of tree shade is my 17 year-old “star” magnolia which is really missing the shade and the wind break the old tree provided.  However, when the new “black tulip” magnolia gets larger than the twig it is, I hope it will provide some relief for its cousin.

There are so many plants I would like to get and put out there, but we are still living with the wreckage from the old tree.  Concrete walkway parts are tilted and the driveway badly cracked thanks to the invasive roots of that ash tree; that, along with a (? maybe more?) break in the main lawn irrigation are subjects for many grousings and speculation and just plain hard work.  I’ve put it all off till later, but yes, I will do it.

Right now, the “new plant” budget is just big enough for some Dutch Iris (both yellow hybrid and deep blue hybrid) and 8 varieties of Muscari or Grape Hyacinths.  Originally planted around the ash tree, the bulbs there “took the hit” when the ash stump was ground out.  For over 35 years, wherever I have lived, there have been Dutch iris and Muscari planted around the front yard.  The only difference between back then and now are the roots left by darn ash tree that have to be hacked at, ripped out, and planted around.  But it will be done! (Right, Bruce?  Bruce, can you hear me?)

See you on the 12th at the Master Gardener office for the plant exchange.  I KNOW that there is a plant or plants with your name on them for you to take home and enjoy! 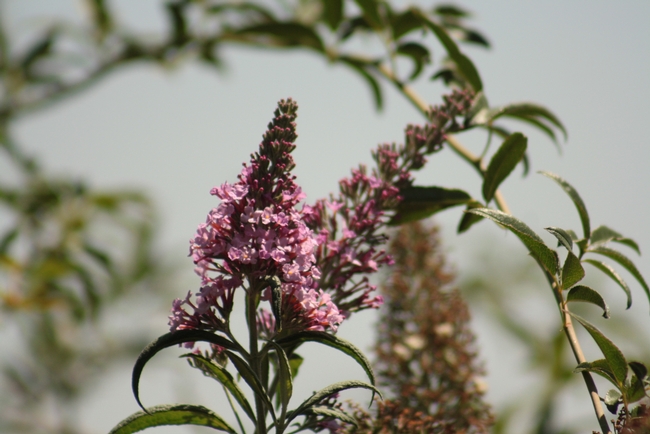 On the Vallejo Garden Tour

Were you one of the smart gardeners who signed up to work with Ken Williams on the Vallejo Garden Tour?  You weren’t – you didn’t?  Boy, did you miss a great time touring through the selected gardens!

Lanie (newbie) and I (oldbe) were assigned a garden on Fern Place.  Since this short street is right off Tennessee St near downtown, I figured that my directions were wrong; surely I didn’t err in following MapQuest!  Nope, I correctly read the map, but what a difference 1 block off a main drag can make!

As I slowly went down the street, “casing the joint” so to speak, I began to forget the traffic noises and began to relax, enjoying the landscaping as I passed?  Is this the place? NO!!  Can this be the one??  NO!!  Finally toward the street end, I saw the banana tree (Ensete ventricsum) with its deep red leafstalk and red-tinged leaves.  I was there!  Getting out of the car, I could barely wait to see what else was growing here!

Oh no, nobody answered the door!  Was it the right day and wrong time or the wrong day and the right time?  I squared my shoulders and walked down the driveway past the roses, past the gladiolas, and closer to the garage.  There were pots of cacti, succulents, and other goodies that confirmed that no car ever went this-away!

There was my host, Mario, and his “helper” watering and weeding in honor of our visit.  Apparently he figured that we would criticize if it weren’t “perfect”!  With all the grassy weeds in my yard, I don’t point fingers at any one!

What a yard!  The most gorgous exotic shade garden I have ever seen!  There were pots (big ones) full of cannas; those wonderful striped leaf ones (the ‘Tiger’ series); ferns galore in even larger pots; Brugmasia, both in pots and in the ground; an enormous Philodendron bipinnatifidum with the deeply cut leaves at least 3 feet long and as wide at the stem!

All of this was growing in the shade of an Acacia tree, which was very well behaved – no suckering from the roots.  Three water features, one with small koi swimming around in the basin, kept the noise from the side houses and the rear neighbor at bay.

I couldn’t understand why visitors kept mentioning how warm it was; my feet thawed out around 1pm!  Looking from the shelter of the tree, I noticed just how sunny both neighbors’ yards were; I was comfy!

Leaving through the garden gate with its arch of grape vines (in barrels), the visitor was then amongst Mario’s collection of sun plants, including a Bougainvillea ‘Barbara Karst’, and then back down the driveway past the roses and to the street.

Having a river rock ground cover with both many large stepping stones and small intimate seating areas made the garden seem very large; of course, the large mirror pieces reflecting key pieces of garden statues and featured plants helped also!

Except for the large tree, this is a young garden!  Mario and his life-partner, Calvin, told us that there was nothing in that back yard seven years ago when they moved in!  All the work and all the planning was done by the two fellows with help from their large circle of friends!  As I told them: “ya done good!”

PS: Mario asked me for a possible plant list to add to the already exotic look!  I ended up trading him 2 Cymbidiums for 2 small Canna rhizomes!  He thinks he got the better side of the trade.  Boy, he doesn’t know!

On June 1, the entire group of volunteers goes on a “field trip” on all the gardens on the tour!  I can’t wait!

PPS: Thanks to Ken Williams who coordinated this tour!

Ah terrariums! How I love this tiny little worlds.  In my experience, which is somewhat limited, the easiest ones are the dry cactus types.  So little water involved. Just add some rocks, sand, and you have an itty bitty desert in that cognac snifter you never use. Stick with shade succulents like gasterias and haworthias. Don't put them too close to a window as the glass from the terrarium will magnify the suns rays and cook them, unless you're going for the desert apocalypse look.

Another cutie is the moss habitat. These kind remind me of my sister-in-law's back yard in Washington state. Very wet,  just a clearing in a forest with some fallen logs.  Mosses and mushrooms and tiny flowers everywhere. Very Jurassic. So, I got brave, and made one. Mine contains babies tears, Irish moss, scotch moss, an African violet, which is normally also an outside ground cover for shade,  some tilandsias, and some dinosaurs figurines for effect. Also a maiden hair fern, that is ailing, but in my defense, it's not me, it's my kitten, Vespa. She's been getting in there and piddling on it. That can't be good. 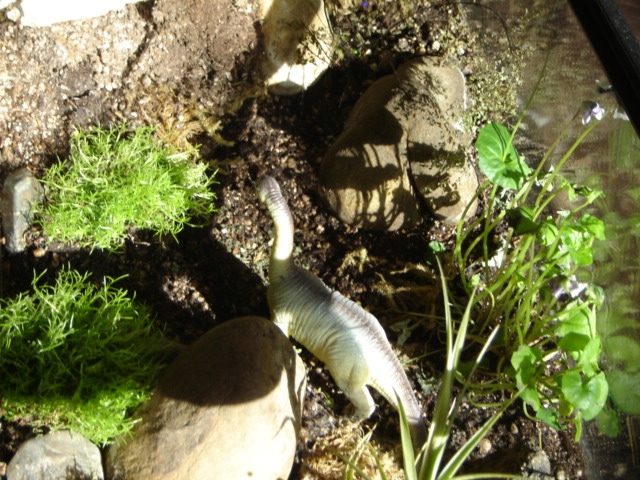 Clash of the Titans: Mutabilis vs. Flowering Pear

One wouldn’t normally think of the pretty Mutabilis rose (Rosa x odorata ‘Mutabilis’), commonly known as the “butterfly rose,” as a titan.  But seeing it go up against my flowering pear, which should be shading the Mutabilis out of existence, makes me think otherwise.

The Mutabilis rose is a beautiful China rose with single flowers that bloom nearly continuously from spring to fall.  Each flower goes through a color change from yellow-gold to pink to crimson, and all three color phases will be on display at the same time.  It is nicknamed the “butterfly rose” because the multi-colored flowers look like butterflies resting on the plant.  It is most often described on rose websites as a large shrub, ranging from 6-10 feet tall, although some websites also describe the rose as a climber.  Mutablis is one of UC Davis’s Arboretum All-Stars, requiring low water once established.

Several years ago, I planted my Mutablis along a back fence, underneath a sapling flowering pear (Pyrus calleryana, ‘Chanticleer’).  I assumed that as the pear tree grew, it would eventually shade out the rose, but I had no place else to put the rose at the time.  Now the fully grown pear tree completely shades the main body of Mutabilis and the rose has responded by climbing ever higher into the pear to seek the sun, putting on a dazzling show of butterfly flowers a good 25 feet up the tree.  It’s spectacular!

Each spring I wonder how and whether to prune Mutablis, and in some years, I make a token effort to clear away dead and crossed limbs.  There’s little point in pruning the rose back to shrub size because it would be entirely shaded by the pear tree.  I wonder if the rose is harming the pear tree and whether I should cut the rose down entirely.  But the rose doesn’t appear to be too heavy to be supported by the pear tree’s limbs and both plants seem happy and healthy.  So I set any decision aside for one more year.

I never imagined that, when I planted Mutabilis in a spot that I knew would eventually become too shady, this foolish but serendipitous placement would create one of my very favorite scenes in my backyard. 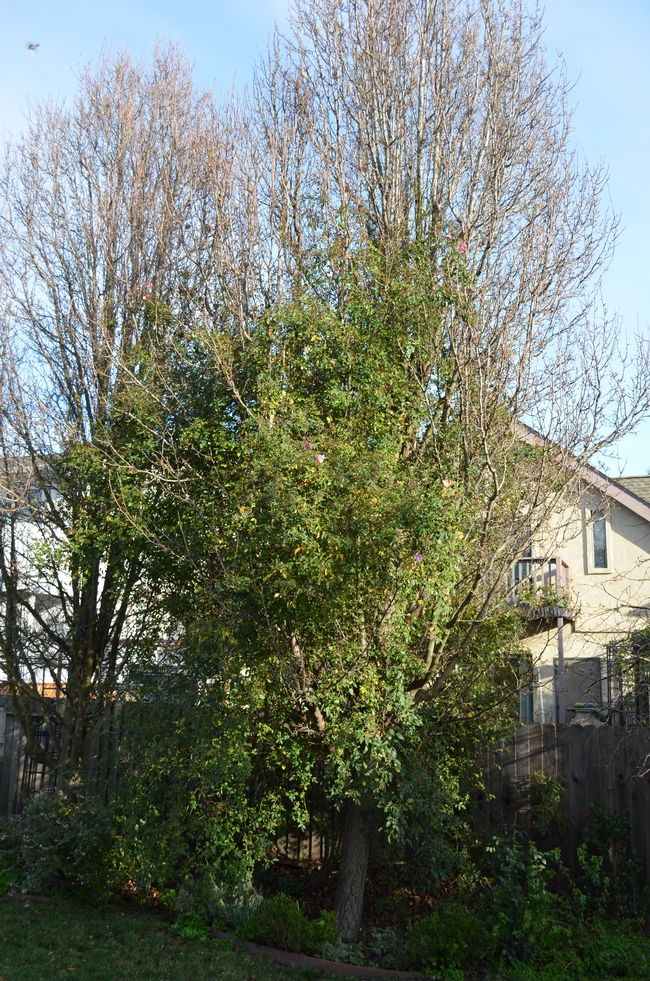 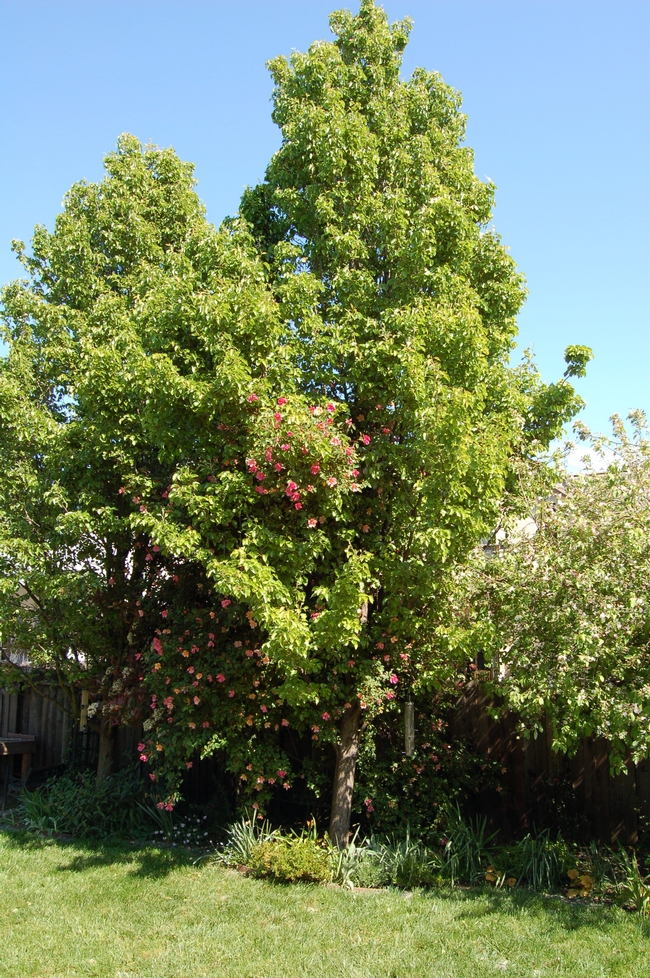 Mutabilis rose in bloom within the pear trees.