Harrison PNAS
Native wildflowers in California are losing species diversity after multiple years of drier winters, according to a study from the University of California, Davis, which provides the first direct evidence of climate change impacts in the state's grassland communities.

The study, covered in TIME, LA Times, and elsewhere, was published in the journal Proceedings of the National Academy of Sciences. It's based on 15 years of monitoring about 80 sampling plots at McLaughlin Reserve, part of UC Davis' Natural Reserve System.

"Our study shows that 15 years of warmer and drier winters are creating a direct loss of native wildflowers in some of California's grasslands,” said lead author Susan Harrison, a professor in the Department of Environmental Science and Policy and a member of UC Agriculture and Natural Resources' Conservation Biology workgroup. “Such diversity losses may foreshadow larger-scale extinctions, especially in regions that are becoming increasingly dry.”

The researchers confirmed that drought-intolerant species suffered the worst declines.

Similar trends have been found in other Mediterranean environments, such as those of southern Europe, bolstering the case for increased climate change awareness in the world's semi-arid regions.

Taken together with climate change predictions, the future grassland communities of California are expected to be less productive, provide less nutrition to herbivores, and become more vulnerable to invasion by exotic species, the study said.

The researchers expect these negative to cascade up through the food web—affecting insects, seed-eating rodents, birds, deer and domesticated species like cattle, all of which rely on grasslands for food.

Rescue effect may be too late

Grasses and wildflowers may be able to withstand the current drying period through their extensive seed banks, which can lie dormant for decades waiting for the right conditions to germinate.

However, California's drought is expected to intensify in the coming decades, so this rescue effect may end up being too late for some species. Scientists believe that a tree - or rather a genetically identical thicket of Palmer's oak - nestled in a gulch on Riverside County's Jarupa Hills is the oldest living plant in California. According to an article in the online plant science journal PLoS ONE, the solitary plant has been growing in that spot for more than 13,000 years.

The discovery was covered widely in the press, including the New York Times, the Los Angeles Times, the Riverside Press-Enterprise, KQED Public Radio, the BBC and several Southern California TV stations.

"If you planted a seedling there now, I doubt very much whether it would grow," UC Davis plant scientist Jeffrey Ross-Ibarra was quoted in the LA Times story. He is one of five UC Davis and UC Riverside scientists who jointly authored the journal article.

Press-Enterprise reporter David Danelski interviewed another author, UCR museum scientist Andrew Sanders, on the steep ridge where the tree grows. Sanders told the reporter the thicket first took root at the close of the last ice age, a cooler and wetter time when glaciers capped nearby San Gorgonio Peak. Palmer's oaks were plentiful then.

As the climate became warmer and more dry, all the oaks except the one growing in this spot died off. The location offers the tree natural protection from wind and nearby boulders funnel rain to its roots.

Danelski reported that human activity is changing the environment. Tract homes are on the hillside below one side of the ridge, and a cement mixing plant is at the bottom of the hill on the other side.

"A Corona beer bottle and a dirty fragment of fabric littered the thicket. A motorcyclist buzzed past on a nearby hillside," Danelski wrote.

Sanders told him he hopes the land will be protected so the plant can continue to beat the odds.

Even at the age of 13,000 years, the Palmer oak is not the country's oldest plant. A clonal colony of a single male quaking aspen in Utah is estimated to be 80,000 years old, according to Wikipedia.

A poster presentation with more information about the California Palmer oak discovery titled A Pleistocene Clone of Palmer's Oak in Southern California is available in pdf format on the UC Davis plant sciences Web site. 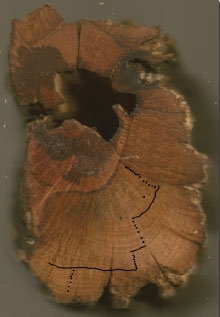