Tips on Having a Happy Rose Garden

Earlier this month, my partner and I jumped into the car and took off to Healdsburg to the Russian River Rose Company, where we arrived just in time for their 10AM talk on “Having a Happy Rose Garden”.  This is a rose and iris nursery in the middle of wine country, in Sonoma County’s Dry Creek area, with a view of lush green hills in the background from the recent rains.  We had been there a few times before, but each time I always pick up some new piece of information or nuance on rose growing.

Included in the talk was a demonstration of how to plant a rose, most of which I already know the basics.  Basically, the hole is dug, about twice the size of the container, and back filled with a half and half mixture of potting soil/compost and soil.  On the surface, they use a 6 inch cover of mulch from Sonoma Compost in Petaluma (www.sonomacompost.com), which is free of weed seeds and pathogens due to the high temperatures generated in the composting process, which is something to see in itself.

One of the handouts included “A Year in the Rose Garden”, a month-by-month guideline for gardeners.  What was interesting to me is that they plant winter annuals in January interspersed with the roses for early spring color.  They choose Calendulas (Calendula officinalis), Johnny Jump Ups (Viola tricolor), and Leucanthemums (L. paludosum) because they are all snail and bug resistant.

They recommend dormant spray (copper sulfate) three times to ward off fungal spores:  Once right after pruning, and a second and third when new growth is about one inch and three inches out, respectively.

Fertilizer applications are recommended for March and again in August, to “reawaken” the garden for fall bloom.  Included is 2 cups of alfalfa pellets as well as the usual organics dug in around each rose.

They do not use pesticides, but use ladybugs for aphid control.  After receiving a shipment, ladybugs are placed in the refrigerator, to slow them down.  A few ladybugs from the bag are put out at the base of the rose bush in the evening, which will keep them from flying away.  They will then crawl up the branches and stay until all the aphids are gone.  Dwarf Scabiosa (S. atropurpurea) is said to be a good haven for ladybugs.  They will breed in it.

For irrigation, they use two half gallon per hour emitters 18 inches apart, with the rose shrub in the center, to avoid root rot.

Their instruction for July: “Minimal attention….Leave town”.  And for December: “Rest and dream about what roses you would like to add to your garden next year!”

Russian River Rose Company is open to the public every weekend during April and May, so there is still plenty of time to visit their beautiful gardens.  For more information, check out their website at www.russian-river-rose.com. 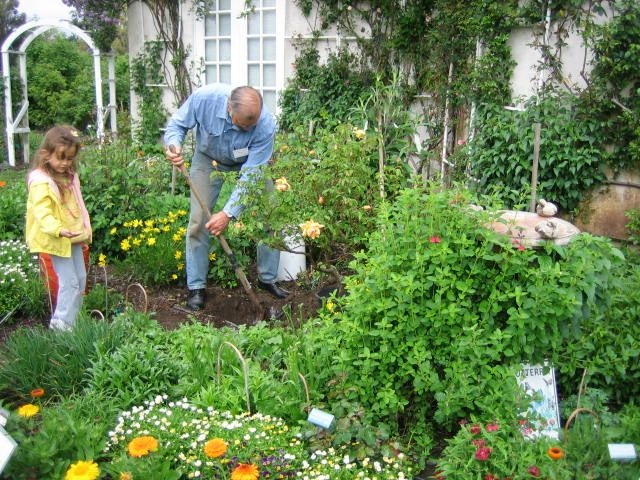 working in garden with kid 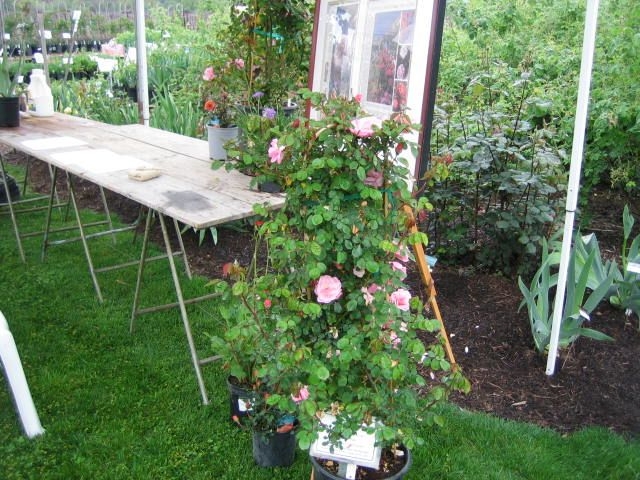 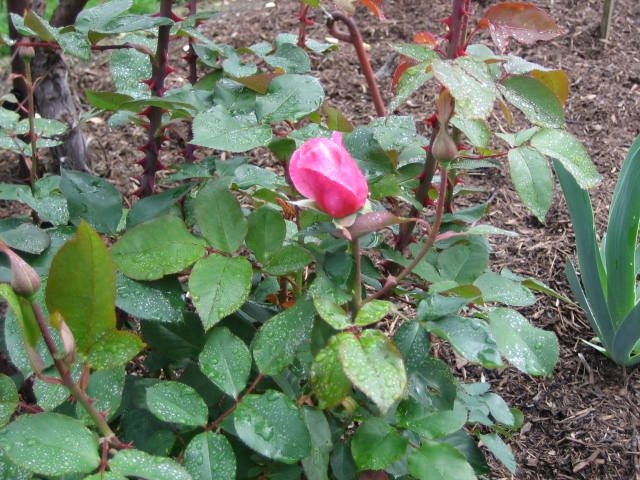 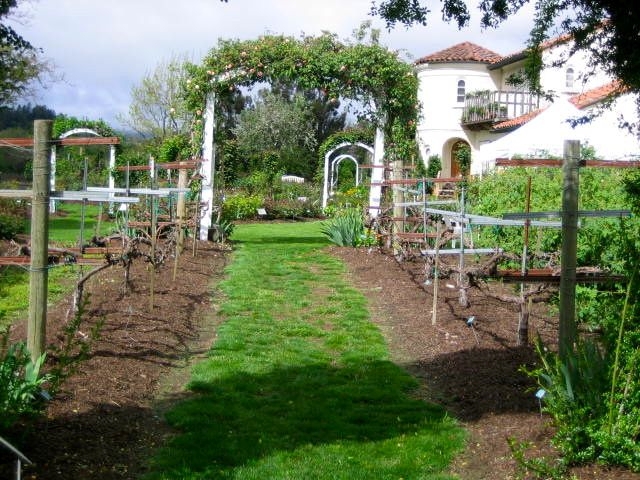 Some folks like to watch the grass grow, flowers bloom, or clouds drift. Others just like to sit back and look for insects. We spotted this... 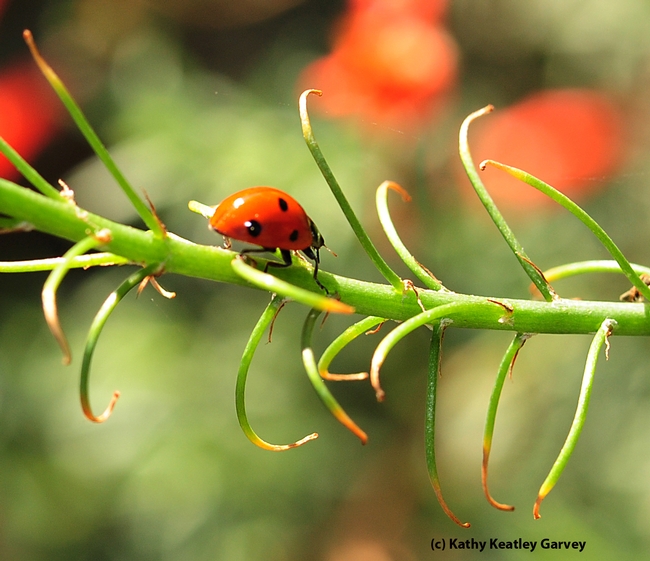 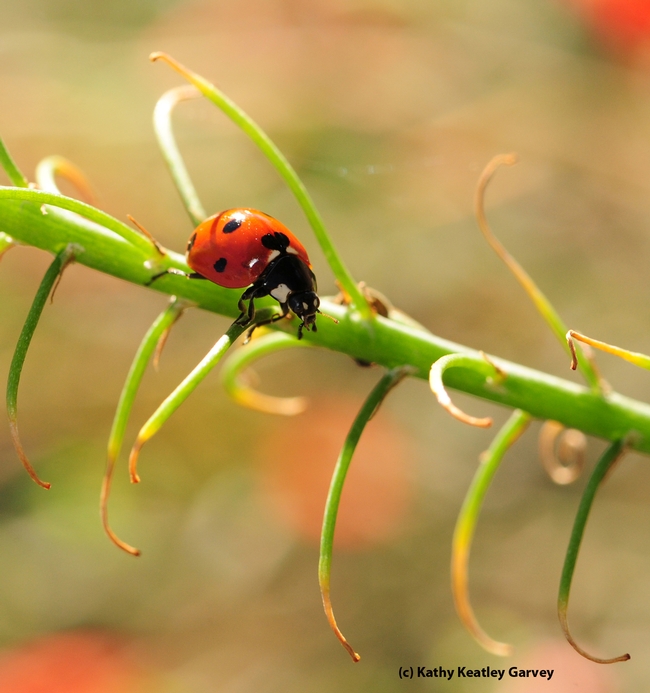 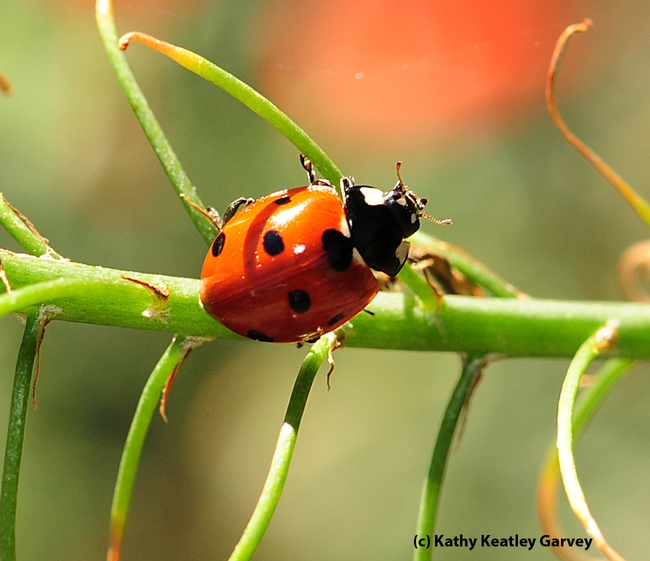