Grafting plants onto specially bred rootstocks is a practice that is common in tree crops. Grafting confers resistance to soil-borne diseases and pests, requiring less inputs and leading to sustainable crop productivity. It is now being used in  some vegetable and fruit crops, such as tomatoes, eggplant, watermelon, cucumbers and cantaloupe.

“Grafting conveys a lot of merits in terms of disease resistance and yield maintenance. It enriches the production practices by introducing more variety. And by making impossible things become possible,” Wang said.

Vegetable grafting has been used since early 2000s, but to many agriculture students the idea was new, reported Stoeckl.

“We're moving forward and advancing with our food which I think is interesting because we used to be all natural and simple but now it's all scientific,” said senior agriculture major Madeline Morataya. A 26-episode weekly video series will debut May 13 on YouTube to help train the next generation of vegetable crop workers and increase their use of effective stewardship practices in vegetable production.

Projections for near-future retirements of people working in California's agricultural production, marketing and post-harvest handling sectors indicate severe re-staffing needs in the coming years. Technological advances have reduced manual labor in agriculture, but increased the need for skilled labor to maintain the sustainability of the vegetable industry.

“We already see it happening,” said Jeff Mitchell, UC Cooperative Extension vegetable crops specialist. “Robotic machines are now used for lettuce thinning in Salinas, but these technologies must be serviced by an educated workforce with knowledge in both mechanics and science.” The first video in the series focuses on urban farming, and the myriad social, economic, ecological, recreational, therapeutic and nutritional benefits of urban agriculture.

“We know that maintaining California's leading role in producing abundant, safe vegetables is critical not only to Americans' health, but also to the state's economy,” Mitchell said.

The video series is offered on the UC Agriculture and Natural Resources (UC ANR) YouTube page on a playlist titled “Training of a New Generation of California Vegetable Producers.” UC ANR is the outreach arm of the University of California which, among other services, provides agricultural research, teaching and advising in all California counties.

Each Monday morning from May 13 through Nov. 4, a new video will premiere in the playlist. The video length ranges from 47 minutes to 7 minutes. The videos will also be made available to high school and college ag professors to use in the classroom.

“We believe that this series of videos on vegetable production will have broad interest beyond the classrooms,” Mitchell said. “The agricultural industry, students in other parts of the United States and the world, and the broader public all have an interest in understanding how the vegetables we eat are produced at the ever-increasing scale at which they are needed.”

The videos depict state-of-the-art technologies and techniques that are in use in many production regions of California today, vegetable farming systems used in other parts of the world, and increasingly popular cottage farming systems that are popping up in urban areas for easy access to healthful foods.

To receive a notification of each video premiere, follow the UC ANR Twitter feed at http://twitter.com/UCANR or set a reminder by visiting the playlist on YouTube. Organic farmer Phil Foster has developed a creative way to nurture the soil on his 200-acre farm near Hollister. He plants cover crops in a single line at the top of the planting bed, saving water and seed while keeping the furrows clear for irrigation.

"We were finding we couldn't use cover crops because of water," Foster said. The narrow strip makes the best use of the limited water supply, while garnering the benefits of cover crops - which buffer soil temperatures, inhibit weeds, increase soil microbial activity, improve water infiltration and add nutrients. Growing cover crops prepares the soil for the production of high-quality vegetables. Organic farmer Phil Foster stands in front of a field with cover crops planted in strips at the top of the planting bed.

Foster is one of eight organic vegetable growers who are working with researchers at Chico State, Fresno State and UC Agriculture and Natural Resources on a project funded with a USDA grant designed to make significant improvements in soil care in organic production systems. He guided project participants around his farm, equipment yard and compost operation in early November to share the techniques he and his staff have developed over three decades to promote soil health. Tiny pores and roots can be seen in the soil at the Foster farm. Tour participants marveled at the soil characteristics, admiring tiny pores and roots in clods of dirt, evidence of the soil's capacity to move water and nutrients. They studied the plant and soil conditions after farm manager Efrain Contreras pulled a carefully crafted implement for rolling down the cover crop across the field with a tractor.

Foster credited Contreras, a 30-year employee, for his role in building the soil on the farm. Labor, Foster said, is his biggest cost. He has 50 full time staff, many with 5 to 20 years of experience.

"They are the key to to the success of the ranch," Foster said. Farm manager Efrain Contreras pulled an implement through a mature cover crop to show how the field can be prepared for planting.

Minimizing and, eventually eliminating, soil disturbance can be combined with organic groundcover, year-round root growth and robust biological activity in the soil to further promote soil health. Following the tour, the farmers talked about ways to attain the goal on their farms of no-till organic vegetable production.

Foster said he will experiment with reducing soil disturbance to determine whether doing so will maintain or increase yields. Another farmer in the project, Scott Park of Meridian, Calif., 50 miles north of Sacramento, said he will dedicate eight acres of his organic farm to comparing the results when the cover crop is chopped and left on the soil surface to chopped and incorporated with tillage.

Over the project's three-year term, the farmers and researchers will continue to experiment with soil-building techniques and share results. Andrew Brait of Full Belly Farmers, foreground, looks at roots and nodulation of rhizobia on the cover crop. Kelly Mulville and Esther Park of Paicines Ranch are in the background. A safflower and vetch cover crop growing in the autumn light. Workers, in the background, manually weed the safflower and vetch cover crop. Ten tips for vegetable gardening during a drought Is it possible to grow a vegetable garden when water resources are scarce and water rationing could be imposed?  Water responsibly, plant carefully, and select fruit and vegetable varieties that are drought tolerant. All of these sustainable gardening practices require less water – and help ensure your family has access to a variety of nutrient rich foods.

Exotic Perennial Vegetables of the Month: Yacon and Malabar Spinach

When gardeners speak of “perennial vegetables,” the edible plants that often come to mind include asparagus, rhubarb, and artichoke. The purpose of this article is to introduce you to other rare and/or unusual perennial vegetables which may be worth cultivating in your own backyard garden.

My quest for rare and unusual perennial vegetables led me to a plant sale recently held at the Occidental Arts & Ecology Center in Occidental, California (see www.oaec.org for more information). Although I purchased a number of perennial vegetables at the sale, most of which I have no experience growing, this article will feature two of those plants, which seem to be thriving thus far in my Solano County backyard garden. I will report back on other weird and wonderful perennial vegetables in the coming months, depending on how well they fare.

I had been searching for yacon (Polymnia sonchifolia), also known as Bolivian Sunroot, for quite some time, and was thrilled to have found it at the OAEC plant sale. Yacon is considered one of the “Lost Crops of the Incas.” Yacon is a relative of the sunflower and and native to the high Andes. Although my yacon plant is currently 5 inches tall, the literature I have read indicates that my yacon plant should reach 5-feet tall at maturity. To harvest yacon, the tubers are dug up in the autumn (so I have another a year to wait). Yacon is a versatile plant, as it can be eaten raw like fruit, or can be stir-fried, roasted, baked or made into pies and chips. Some cultures use the leaves of the yacon plant with which to wrap their food. Although I have never tasted yacon as it is not readily available in the markets that I shop at, I have read that yacon tastes like jicama, only better. Another description that I found, said that yacon tastes like a cross between celery and a Granny Smith apple. Yacon is best grown in full sun and in well-drained, fertile soil.

In recent years, yacon has grown in popularity, both in gardening literature and in nurseries specializing in rare plants. This may be due to the fact that yacon is an up and coming “super food,” as food companies are developing yacon into various products such as yacon syrup, which is a low-calorie sugar substitute appealing to both diabetics and people on diets.

Although I debated whether to buy malabar spinach (Basella rubra) at the OAEC plant sale, I gave in, as I knew malabar spinach to be a staple for those interested in permaculture/creating an edible food forest in their backyards. It is not actually spinach, but has the flavor of spinach, and can be substituted in recipes which call for spinach (note that malabar spinach is fleshy and mucilaginous, and is best consumed cooked and not raw). Under the right conditions (e.g., full sun, and fertile, well-drained soil), malabar spinach which is a vine requiring trellising, can reach 8-10 feet in length. Because malabar spinach is so prolific, I have read that one vine is sufficient to feed a family of 4. Malabar spinach is frost tender and may need to be dug up and brought indoors during the winter.

I will report on other unusual perennials growing in my backyard in the coming months, so stay tuned for updates. 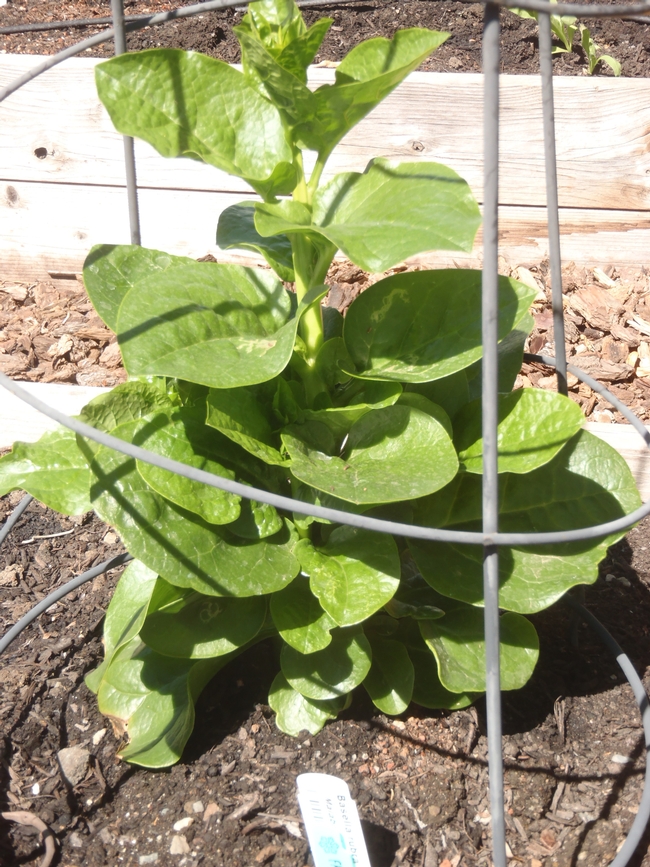 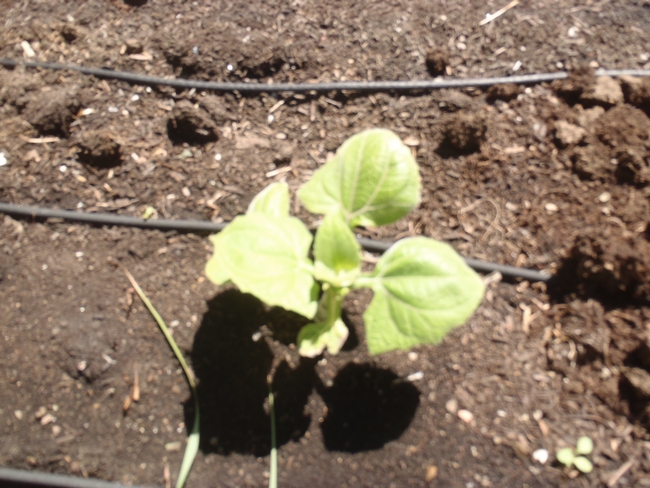