May the Fourth Be With You 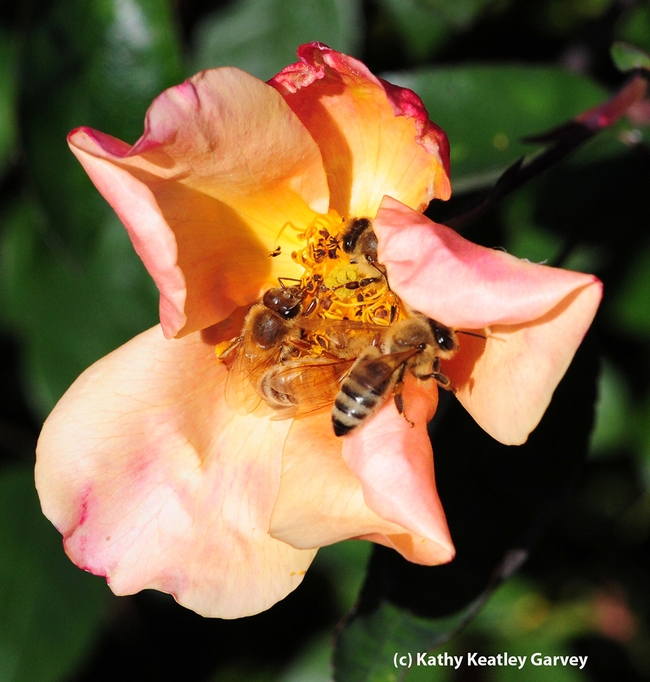 May the Fourth Be With You: Four honey bees share a rose blossom. (Photo by Kathy Keatley Garvey)

May the Fourth Be With You: Four honey bees share a rose blossom. (Photo by Kathy Keatley Garvey) 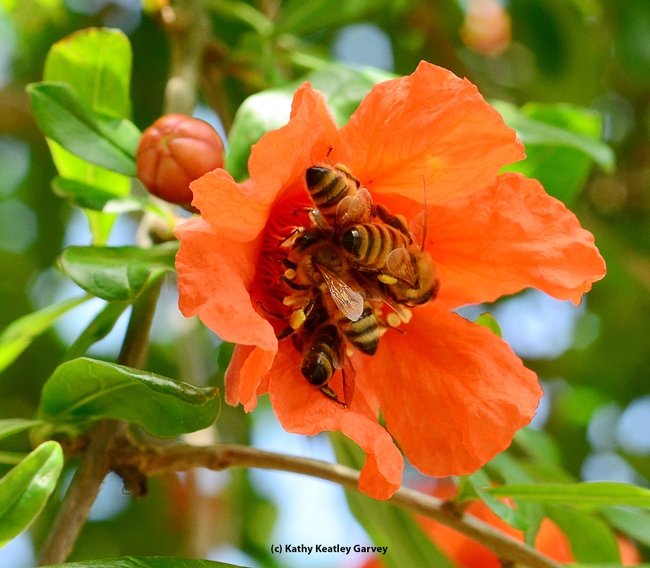 May the Fourth Be With You: Four honey bees share a pomegranate blossom. (Photo by Kathy Keatley Garvey)

An Insect Assembled by a Committee?

This is an insect that looks as if it were assembled by a dysfunctional committee: long angular legs,  long antennae, and beady eyes on a thin... 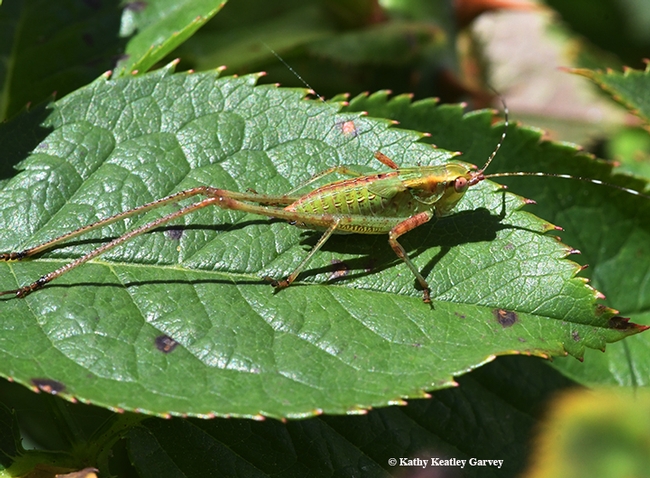 A katydid nymph on a rose leaf. The nymphs re wingless and have black and white banded antennae, according to UC IPM.(Photo by Kathy Keatley Garvey)

A katydid nymph on a rose leaf. The nymphs re wingless and have black and white banded antennae, according to UC IPM.(Photo by Kathy Keatley Garvey) 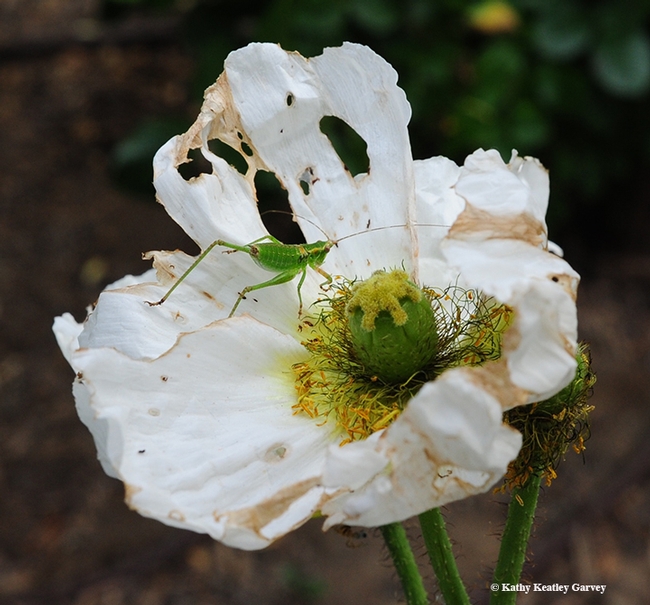 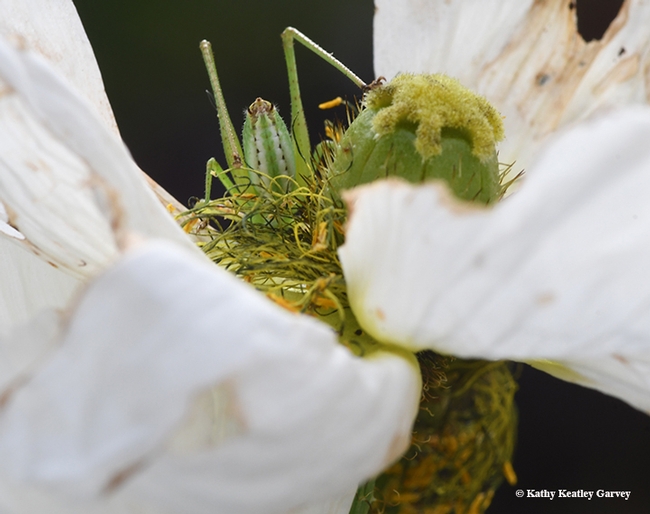 Time to leave. This katydid escaped from the camera. (Photo by Kathy Keatley Garvey)

I have been traveling a very inviting pathway to a building complex on the UC Davis complex quite a bit during the last few months.  As I enter the complex I am put at ease at the sight of the hedges of shrub roses.  The shrubs line the parking lots,  pathways, and lawns surrounding the various buildings.  These rose shrubs have been covered in rosy blooms of pink, despite the very hot temperatures since late May.

I am curious, these roses don't seam to have any disease issues, no black spot, rust, mildew or any aphids.  Many years ago I planted two simple rose shrubs.  They reminded me of the roses I had seen on my travels up the Mendocino coast.  Those roses were leaning on wooden fence rails, tucked under window sills and sometimes stuck right out in an open field.  The flowers from these bushy roses were usually a simple form, sometimes with just a few petals lying open to catch the sun.  The bushes I planted then were also carefree and only required an annual dead-heading and pruning to keep them in-bounds from the bordering sidewalks and driveway.  The roses were not full of thorns, but they weren't the type I would cut and put in a vase.  The rose bushes I see now remind me of those simple roses of years ago.

As my husband and I contemplated retirement, and the time we would have to indulge in our hobbies, we both agreed the addition of roses to the gardens would be something we would both enjoy.  We took long rides to the rose nurseries along Highway 92 near Half Moon Bay and chose many beautiful roses from the blooming selections.  We mostly chose the hybrid tea roses with their elegant stems and glorious fragrant blooms.  We placed these newcomers throughout the garden, even creating a bed of standard tree roses nearby the dining room windows, what a beautiful display they would provide.

These hybrid tea roses took a lot more time and effort than what I was used to with the simpler shrub roses of years ago.  I expected more dead-heading and pruning to keep the elegant shape, but now I had many persistent disease issues that just wouldn't go away.  I did discover that when a disease took over a hybrid tea, that severe pruning would not kill the plant.  Roses are tough plants and many times would return with a vengeance, especially the really thorny ones.  I also learned that if I pruned below the grafting point with the root stock, the pretty rose on top was no longer part of the plant, duh!  So you live and learn.  OK, now after about eight years with these hybrid tea roses, I am slowly replacing them with drought-tolerant perennials that actually like growing in USDA Zone 9b with only a little pruning to keep them in-bounds, similar to those bush roses I planted in the early 80's.

As I walk the parking lot and up the pathways, past the lawns and the bicycles, I am very tempted to add roses back to our garden.  But this time they will be the bushy type shrub roses.

On the UC Davis campus I discovered Arboretum All-Stars program,  also on line at arboretum.ucdavis.edu/arboretum_all_stars.aspx .  A plant that makes it as an "All- Star" must be low maintenance, drought-tolerant, attract beneficial wildlife, and for trees be power-line friendly.  You can search this group on line for more information on each plant in the program.  At this site I found Rosa 'Korbin', Rosa 'Perle d'Or', Rosa 'Pink Gruss an Aachen' and my favorite, Rosa x odorata 'Mutabilis' .  The 'Mutabilis', aka Butterfly Rose, is particularly nice with an open canopy and multi-colored flowers.  I have seen this shrub rose growing beautifully alongside various perennials, especially complimentary to many of the gray-green Mediterranean perennials I have seen on campus.

In the fall, when I usually add new plants to the garden, I will once again add roses back into the garden, but this time they will be shrub roses from the All-Star selections. 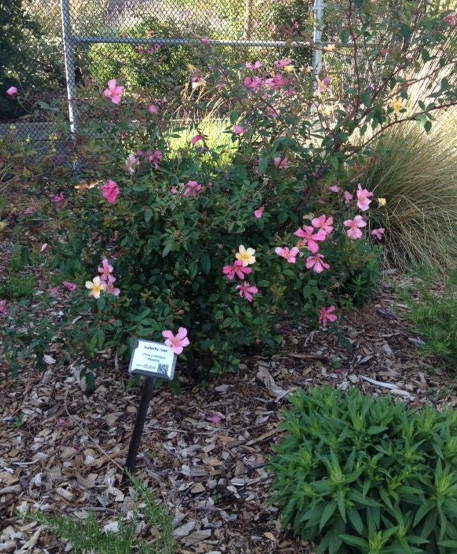 We all have a plant that we’re willing to sell the kids for (or at least rent them out).  Does this sound familiar to you?  I sometimes feel that ya can’t be a dedicated gardener without one “gotta have” plant.  Well, my plants are 2 roses.  I know, everybody on the block seems to sell roses.  BUT I don’t desire any old rose; no sir, I have my heart set on 2 roses that are somewhere in the world, but where?

My quest, on and off for 30 years, started when a dear friend of my mother’s gave her a cutting of ‘McGredy’s Yellow’.  This particular rose was introduced in 1934 the father of the present Sam McGrady and was advertised at the time as a “buttercup” yellow.  Unfortunately, the writer of captions in The Ultimate Rose Book by Stirling Macoboy disputes this description and claims, “Light lemon yellow would be more accurate in cool climates; in hot, the color could be very pale indeed.”  He then continues on about “the rose has deteriorated with age and it takes real skill to grow it to perfection.”

Not will to take the experts on head first, I can tell you that in Santa Rosa, CA, that cutting grew into a magnificent rose bush with butter colored, large blooms.  Maybe the bush never read the “expert” review!

Forward on to twenty years plus- years ago.  I started to live in Vallejo in a house with a totally non-descript yard.  Green foliage plants sparsely planted – no color and no interest.  I got a cutting from my mother’s rose bush and as it grew, planted in the front yard next to the porch.  I received lots of compliments from the neighbors when it bloomed.  By the way, this is considered to large flowered tea rose.  In fact, the rose bush was a major selling point when we sold the house.  Just one proviso from the buyer:  DON’T TOUCH THE ROSE BUSHES, ESPECIALLY THE YELLOW ONE!  Okey dokey, will do!

I figured I could always get another rose.  WRONG!  I have looked all over the internet: finally found two sources!  Yea, the looking is almost over –NOT!  Both sources: Beales in England and Vintage Gardens in Sebastopol, ca,  appear to be gone!  Beales never answered by emails (Peter has died) and Vintage Gardens is holding its going-out-of-business sale this month, limited to stock on hand.

Lucky for all of us that Darrell Schramm is a Master Gardener; he also belongs to the Heritage Rose Group.  One of the members is running my plea to anyone for cuttings.  My fingers are crossed.

Of course, I can go back to the old homestead and see if “my” rose bush is still there.  But I don’t to be the crazy old lady having the hissy fit if it isn’t.

The other rose that I had to leave behind over 30 years ago is the ‘Sunset Jubilee’, another rose that is not in production anymore.  Jackson & Perkins introduced it in the mid 60’s to honor Sunset Magazine.  After a couple of years they renamed it and now positively state they never had such a rose with such a name even when confronted with an old copy of Sunset’s Rose Care Book with the rose on the cover.  That search I’m saving for later!

The aphids know how to plan a family reunion.  Grandma, grandpa, aunts, uncles, mom and pop, brothers and sisters, cousins and more... 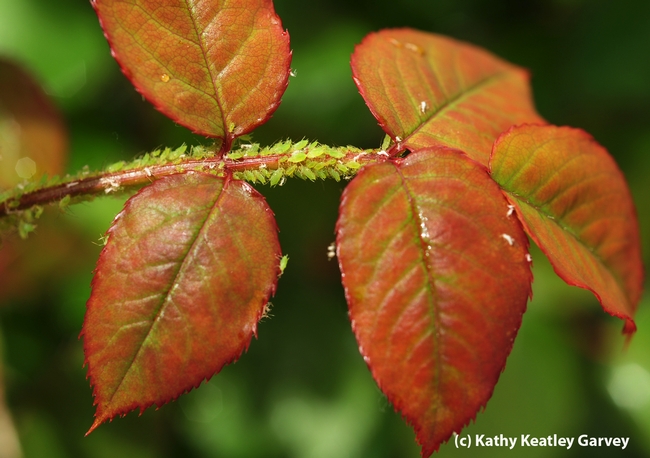 Aphid reunion on a rose. (Photo by Kathy Keatley Garvey)

Aphid reunion on a rose. (Photo by Kathy Keatley Garvey) 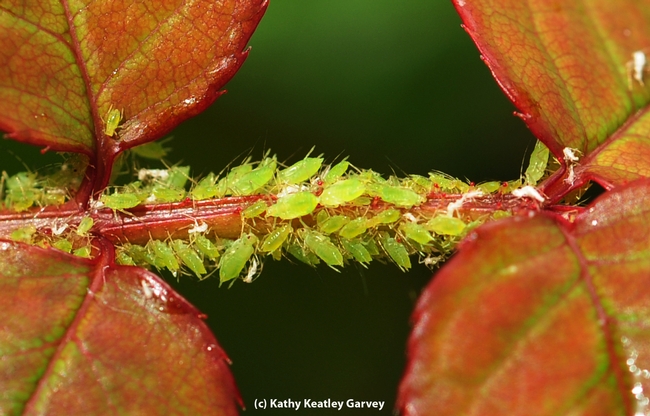 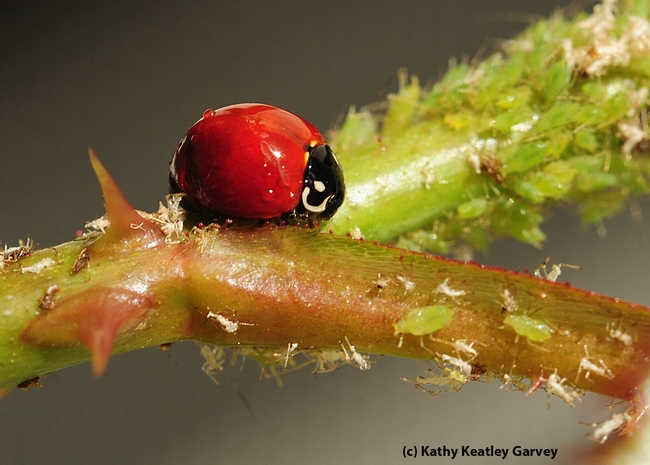 A gorged ladybug has just polished off a row of aphids. (Photo by Kathy Keatley Garvey)