California's 2018 wildfire season was the deadliest and most destructive the state has ever seen. Even before the flames were extinguished, politicians, researchers, foresters, firefighters, insurance and utility company representatives, homeowners and landowners in the state's wildfire-prone areas were trying desperately to figure out how such devastation could be prevented in the future.

One reason for the destructive fires is a 100-year history in California of aggressive fire suppression. Most of the state's natural ecosystems evolved over millennia with periodic fires. Without fire, natural areas build up a great deal of vegetation – trees, shrubs, leaf litter and pine needles – that once ignited, can fuel a raging blaze. Two UC Cooperative Extension advisors in Humboldt County believe the best way to bring back natural equilibrium on the land is by bringing back fire, and they believe it can be done in a way that is safe, effective, affordable and even fun.

Prescribed fire is part of California's past. Native Americans used fire to favor the plants and trees that provided their most nutritious foods, to open up areas for ease of travel and to attract game. In the 1980s, the California Department of Forestry and Fire (CAL FIRE) launched a Vegetation Management Program to share the cost and liability of prescribed fire on private land. At the height of the program, 65,000 acres of private lands were burned per year. However, by the mid-2000s, the agency had cut program funding, and private lands burning reduced to less than 5,000 acres per year in 2015. CAL FIRE is currently revamping their Vegetation Management Program, but UCCE experts say other pathways are also needed to regain ecosystem function on California's wildlands.

Born and raised in northern Californian, Lenya Quinn-Davidson, UCCE fire advisor, and Jeff Stackhouse, UCCE livestock and natural resources advisor, were deeply concerned about habitat loss and fuel buildup on private lands in Humboldt County. They investigated a concept being implemented successfully in other parts of the country, the formation of Prescribed Burn Associations (PBAs). Lenya Quinn-Davidson and Jeffery Stackhouse, UCCE advisors and co-leads of the Humboldt County PBA, on an understory burn in southern Humboldt in late April 2019. (Photo: Lenya Quinn-Davidson)
Quinn-Davidson and Stackhouse traveled to Nebraska in March 2017 with Matt Cocking, forester with their local Natural Resources Conservation Service office, and Humboldt County rancher Dean Hunt to learn first-hand from two successful PBAs. They conducted prescribed burns in Nebraska, where they discovered similarities between their home turf in California and the Great Plains.

The Humboldt County Prescribed Burn Association has a president, board of directors, a treasurer and 85 members.

“More than half of the members are not landowners,” Stackhouse said. “People have houses in town, but want to go outside and experience land improvement on other people's property.”

“People are willing to pay member dues to be a part of this community experience, get the training and to feel positive about fire, not afraid of it,” Quinn-Davidson said.

The PBA provides training, equipment and labor to safely use fire and meet permit requirements. So far, the Humboldt County PBA has burned 1,022 acres. And after each burn, they celebrate with food and drink.

The PBA is providing a space for a community of cooperation to grow. Groups and individuals with views that previously seemed miles apart – environmental activists, long-time ranchers, industrial timber organizations and well-established environmental organizations – are forging new alliances.

“It's interesting to see different groups meeting and burning with each other, to listen to them speak from their corners of the universe, giving each other room to speak and actively listening,” Stackhouse said. The association is so successful, Stackhouse and Quinn-Davidson invited their UC Cooperative Extension colleagues from across the state to Humboldt County for a four-day workshop to learn how they might be able to replicate the concept in other fire-prone areas of California.

“As a total novice, I received training and feel more confident about use of personal protective equipment, how to use a drip torch, hand tools, a water tank/pump/hose, and how to start developing a Prescribed Burn Association (PBA) on the Central Coast,” Rao said.

Another participant, UCCE forestry advisor Yana Valachovic, valued the opportunity and believes events like these could help solve a serious problem facing California.

“Talking about the use of prescribed fire in the abstraction does not move the meter,” she said. “California desperately needs experiences like this to empower community leaders and reincorporate fire into our management tool boxes.”

UC Agriculture and Natural Resources (UC ANR) brings the power of UC research in agriculture, natural resources, nutrition and youth development to local communities to improve the lives of all Californians. Learn more at ucanr.edu. Imil Ferrara of the Mendocino County Fire Safe Council on a burn during the UC ANR Fire Retreat in June. (Photo: Lenya Quinn-Davidson) The study was described in the UC Berkeley College of Letters and Science newsletter ScienceMatters@Berkeley. The article said burning could have helped indigenous Californians in many ways.

"If you're a hunter-gatherer living off the land, burning allows you a lot more choice, especially if there's a period of drought or a particularly wet year," the story quoted Kent Lightfoot, an anthropology professor directing the project.

The research includes the study of soil cores to:

The study is being conducted in an area thought to be the site of an ancient settlement of Amah Mutsun Ohlone Native Americans, the article said. Striplen himself is of Amah Mutsun descent and is serving as a liaison between the scientists and the tribe. 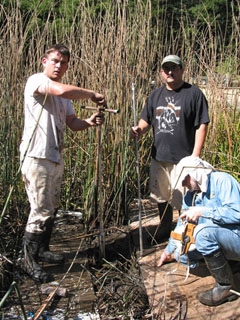