A mountain lion entered an Orange County corral last week where nine pygmy goats belonging to members of the Trabuco Trailblazers 4-H Club were housed. Only one goat survived the encounter.

“We know that this is happening all over California,” Quinn said. “Sixty to 85 percent of depredation permits are issued to hobby farmers and ranchers who seek to kill wild animals that threaten their livestock.”

The loss of the goats is a sad reminder for Californians to be aware of wildlife predators in their areas and make sure that livestock enclosures are secure against them. The Mountain Lion Foundation has information for keeping livestock safe in mountain lion country, including plans for inexpensive lightweight enclosures that work well in Southern California. Quinn — along with UC Davis veterinarian Winston Vickers, UC Cooperative Extension specialist in youth science literacy Martin Smith, and the Mountain Lion Foundation — is developing a comprehensive 4-H curriculum focused on protecting both livestock and wildlife.

“This loss would have never happened if they had a properly constructed pen,” Quinn said. “The pen had holes and was held together in places with zip ties. 4-H members have to understand what predators are in their areas, how the animals can get into enclosures – whether they will dig, if they jump and how high.” The killing of eight goats and injuries to the ninth goat by a single mountain lion may seem overly vicious, but the animal was acting according to instinct. Once inside a pen or paddock, a mountain lion will often kill until all movement stops, according to the Mountain Lion Foundation. Lions are most vulnerable to injury when taking down natural prey like deer that have lethal antlers and hooves. In a natural setting, a deer herd will run away, leaving a lion with just one catch to be concerned about. Not so for penned or fenced-in livestock.

The 4-H curriculum now being developed will empower 4-H youth to protect both predators and livestock by understanding wildlife behavior and proper animal husbandry practices. The curriculum will be available to all 4-H clubs in California – which include 27,444 youth enrolled in livestock projects – and to 4-H clubs nationwide.

In the video, a mountain lion returns to the goat pen the evening after
killing eight goats, but cannot re-enter. (Video: Winston Vickers)

The night after the Trabuco Canyon pygmy goat attack, the same mountain lion was caught on camera returning to the pen, but he was unable to enter the shored up enclosure. Vickers said the lion shouldn't cause any more problems.

“It is likely that the lion may come by the area as part of his normal territorial circulation periodically, but I would not expect further losses given the additional pen improvements that are planned, and I would not expect any greater risk to people at the location versus any other in the Santa Anas (canyons of Orange County),” Vickers said.

Vickers said he hopes that the 4-H members will not choose to kill the mountain lion responsible for the late March attack.

“The lions in their area are in serious trouble, and the loss of a single lion could affect their genetic viability for years to come,” Vickers said.

Drought is a scapegoat for wildlife in urban areas Mountain lions' range is the greatest of any large wild terrestrial mammal in the Western Hemisphere. (Photo: Wikimedia Commons)
The California drought is being blamed for increased sightings of wild animals in urban areas, a situation for which humans are more likely responsible, reported Haya El Nasser on Al Jazeera America.

The story said a bear recently wandered into a Little League baseball game in San Luis Obispo and mountain lions are jumping fences in Northern California to kill goats. Experts said the sightings might be unusual, but not abnormal.

For decades, the article said, sprawling development into natural habitats has brought wild animals face to face with humans.

Scott said the drought is taking a toll on wildlife reproduction.

“This is the third year of drought, and that's three bad years of reproduction for wildlife species,” he said. “Wildlife population is starting to decline. It's attrition rather than a catastrophic drop, but if we went through another drought year, who knows?”

A mountain lion tracked with a GPS collar by UC Davis scientists made a two-month, 100-mile trek through San Diego County - skirting highways, the Wild Animal Park and Camp Pendleton beaches - before being shot in April because he raided a farm near the community of Japatul.

The San Diego Union Tribune reported last Saturday on the improbable journey of M56, the moniker by which the lion was known.

The UC Davis Wildlife Health Center began the mountain lion tracking project in 2000, the article said. At first, scientists focused on evaluating the impact of lions on federally protected bighorn sheep in Riverside and San Diego counties. Over time, they also assessed human-lion interactions and patterns of movement.

In 10 years, the scientists have collared 53 lions. Twenty-five of those have died from disease, collisions with cars, unlawful hunting and state-approved killings to remove animals deemed a nuisance.

UC Davis veterinarian Winston Vickers told reporter Mike Lee that about 20 adult lions now live in the Santa Ana Mountains, which are almost entirely separated from other habitat by freeways and homes.

The odyssey of M56 surprised scientists.

"We didn’t even have any idea that a mountain lion could travel that far in this fragmented landscape so quickly,” the story quoted Trish Smith, a senior ecologist for The Nature Conservancy in San Diego.

Ultimately, M56 found a farm with six or eight sheep and at least one sheep was killed. If the owner of a deceased domestic animal requests its killer be put down, officials are obligated to do so.

However, in its short life - estimated to be between 18 and 20 months long - M56 did its part for mountain lion conservation. The story said scientists will continue to reference M56's incredible journey for years as they study how people and lions can co-exist. 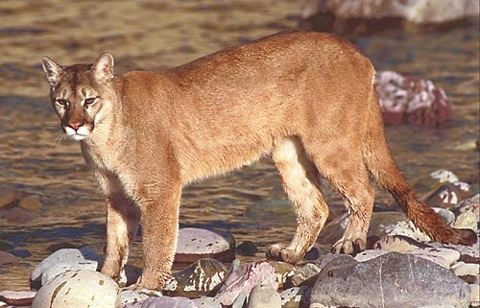