Farmer Jesse Sanchez hosted an agricultural tour from Afghanistan at Sano Farms last year as part of his involvement with UC ANR's Conservation Agriculture Systems Innovation Center.
Jesse Sanchez, a farm manager for Sano Farms near Firebaugh and Mendota, was honored by the White House as a "Champion of Change" last month for his commitment to building healthy soils, reported Megan Ginise in the Fresno Bee.

Sanchez is an active member of the UC Agriculture and Natural Resources (UC ANR) Conservation Agriculture Systems Innovation Center (CASI), a diverse group of UC researchers, farmers, and representatives of public agencies, private industry and environmental groups that work together to develop knowledge and exchange information on conservation-oriented production systems in California.

In 2009, CASI named Sanchez and his employer, Alan Sano, its "Conservation Agriculture Innovators of the Year." The 2015 honor from the White House is another recognition for efforts to make soil health a priority on the 4,000-acre farm that produces garbanzo beans, garlic, processing and fresh market tomatoes, along with pistachios and almonds.

Jeff Mitchell, UC ANR Cooperative Extension specialist and CASI chair, said the White House's acknowledgment, which honors 'everyday Americans who are doing extraordinary things,' is a very fitting recognition for Sanchez and all of Sano Farms.

"They're very much pioneers, very innovative and persistent as well," Mitchell said. "What they've done through the vision they have had, sticking with it, learning step-by-step how to improve the system how to adjust things."

The NRCS article noted that Sanchez and Sano have long shared their work with Mitchell, and through Mitchell with other farmers interested in conservation agriculture systems. It's been called a "wake-up call." And that it is. It's designed to alert people to a problem that needs fixing. And that's good news for the... 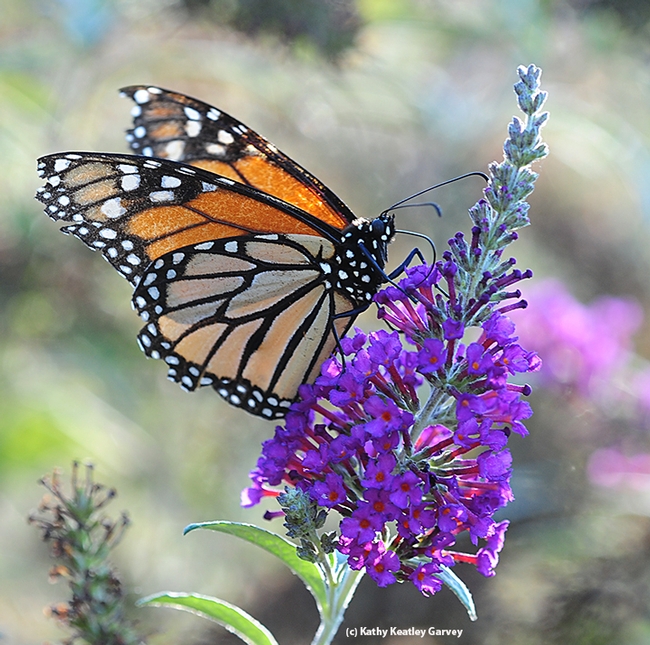 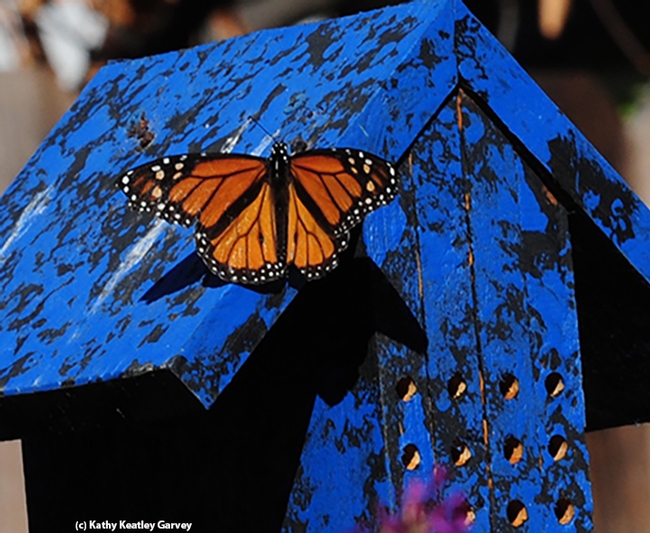 A male monarch touches down and rests on a bee condo in Vacaville, Calif. (Photo by Kathy Keatley Garvey) An electric mulching mower, which cuts grass clippings into fine pieces and leaves them on the lawn. (Photo: Cheryl Reynolds)
Gov. Jerry Brown asked Californians to cut water use by 20 percent a year ago. Officials at the State Water Resources Board announced in March that water users haven't come close to meeting the conservation goal. To help homeowners save water while maintaining a beautiful lawn, UC Agriculture and Natural Resources (UC ANR) horticulture advisors recommend “grasscycling” turf at homes, schools, parks and businesses this spring and summer.

In short, grasscycling involves leaving grass clippings on the lawn, rather than collecting them in a bag and shipping them off to a landfill.

“The clippings sift down to the soil surface and act like a mulch, reducing water evaporation so you can cut back on irrigation,” said Karrie Reid, UC ANR Cooperative Extension environmental horticulture advisor in San Joaquin County. “This is a simple and elegant way to save water that requires very little extra effort.”

If you don't have a mulching mower, Reid says, “It's probably time to replace the mower.” As an alternative, a mulching blade can be attached the bottom of most mowers. The special blade makes a second cut when mowing over grass, cutting grass clippings into finer pieces.

In most California climates, mowing once a week with a mulching mower is sufficient. If grass is growing so quickly a once-per-week mowing cuts off more than one-third of the blade, it's a sign that too much water is being applied.

In addition to reducing water use, grasscycling cuts down on fertilizer needs.

“As the clippings break down, nutrients are returned to the soil,” Reid said. “Most of the fertilizer that is applied to lawns ends up in the leaf blades, so it only makes sense to retain as much of that on the lawn as possible.”

A five-page UC ANR publication on mowing and grasscycling is available for free download from the UC ANR Catalog. The publication includes a table with mower height settings for the most common types of turf grass grown in California.

In addition to working with horticulture professionals, Reid serves as advisor to the coordinator and volunteers of the UC Master Gardener program in San Joaquin County. Master Gardeners are UC ANR volunteers who are trained by UC academics in sustainable landscape, ornamental tree and garden development and maintenance.

More than 6,000 volunteer Master Gardeners form a network to disseminate research-based gardening information across the state, donating upwards of 350,000 hours of time each year. The California clapper rail — a bird found only in the bay — has come to depend on an invasive salt marsh cordgrass for nesting habitat. (Photo: Robert Clark)
Can't live with them, can't live without them — at least not at first when it comes to the relationship between some invasive and endangered species.

In a recent study published in the journal Science, researchers at the UC Davis examine that conundrum now taking place in the San Francisco Bay. The California clapper rail — a bird found only in the bay — has come to depend on an invasive salt marsh cordgrass, hybridSpartina, for nesting habitat. Its native habitat has slowly vanished over the decades, largely due to urban development and invasion by Spartina.

Their results, picked up by TIME magazine, showed that, rather than moving as fast as possible with eradication and restoration, the best approach is to slow down the eradication of the invasive species until restoration or natural recovery of the system provides appropriate habitat for the endangered species.

“Just thinking from a single-species standpoint doesn't work,” said co-author and UC Davis environmental science and policy professor Alan Hastings. “The whole management system needs to take longer, and you need to have much more flexibility in the timing of budgetary expenditures over a longer time frame.”

The scientists combined biological and economic data for Spartina and the clapper rail to develop a modeling framework to balance conflicting management goals, including endangered species recovery and invasive species removal, given budgetary constraints.

While more threatened and endangered species are becoming dependent on invasive species for habitat and food, examples of the study's specific conflict are rare. The only other known case where the eradication of an invasive species threatened to compromise the recovery of an endangered one is in the southwestern United States, where a program to eradicate tamarisk was canceled in areas where the invasive tree provides nesting habitat for the endangered southwestern willow fly-catcher.

“As eradication programs increase in number, we expect this will be a more common conflict in the future,” said co-author and UC Davis professor Ted Grosholz.

The scientists used data from Grosholz's lab as well as from the Invasive Spartina Project of the California Coastal Conservancy in their analysis.

Spartina alterniflora was introduced to the San Francisco Bay in the mid-1970s by the Army Corps of Engineers as a method to reclaim marshland. It hybridized with native Spartina and invaded roughly 800 acres. Eradication of hybrid Spartina began in 2005, and about 92 percent of it has been removed from the bay. The cordgrass has also invaded areas of Willapa Bay in Washington state, where efforts to eradicate it are nearly complete, and invasive Spartina has been spotted and removed from Tomales Bay, Point Reyes and Bolinas Lagoon in California.

Co-authors include UC Davis environmental science and policy professor James Sanchirico and Sunny Jardine, a Ph.D. student at UC Davis during the study and currently assistant professor at University of Delaware.

“This work is significant in advancing a general, analytical framework for cost-effective management solutions to the common conflict between removing invasive species and conserving biodiversity,” said Alan Tessier, program director in the National Science Foundation Division of Environmental Biology.

From the 13,400 monarch butterflies currently overwintering in Pacific Grove’s Monterey pine trees, to the salmon migrating upstream from the ocean to their natal river in our watersheds, to the western fence lizard doing pushups on your concrete curb, we are always surrounded by nature in this state. California is one of the most biologically diverse places on Earth, providing a home for over 30,000 species of insects, 63 freshwater fish, 46 amphibians, 96 reptiles, 563 birds, 190 mammals and more than 8,000 plants!

E.O. Wilson, conservation biologist, sociobiologist, and the world’s leading authority on ants says that “Nature holds the key to our aesthetic, intellectual, cognitive and even spiritual satisfaction.” My hope for Green Blog readers this Thanksgiving week is that you can find some time to spend a few uninhibited, unstructured minutes in nature. Let your gratitude brim for whatever curiosities and satisfactions its discoveries may fulfill in you!