I spend a lot of time reading the gardening articles produced in England during the middle of the past century.  I find the material soothing, as I can’t possibly be expected to actually do anything that is advised.  I was interested however, in the vast amounts of “leaf mold” that was believed to be crucial in their gardens.  I have since discovered that it is nothing more than compost with a more interesting name.

My own yard is small, steep, and accessible only by stairs on either side of the house.  Weary of hauling things up and down in buckets and bags, I have made various attempts at composting on a small scale.  One successful measure was to create a “leaf mold bucket” that produced a decent soil amendment about four times per year.  The container is a 15 gallon plastic nursery pot that came with a tree.  The key is to be selective about what goes into it.  I start with leaves, but not just any leaves.  Broadleaf deciduous leaves such as sycamore or maple will do well.  I have kiwi vines that supply leaves both when they fall in November and again in April when they are pruned.  So the pot is filled with leaves and then tamped (you can just step into the pot).  Then it topped off with more leaves and tamped again, and again.  This is why you have to be choosy about your leaves because they should be dry and brittle so they will crumble.  It is surprising how long you can keep this up in such a small container, as the leaves really have little volume when crushed.  This special bin hangs out with me for weeks as I periodically sweep the patio of leaves.  When the pot really can accept no more leaves, it gets moved to an area of the yard that gets over-spray from lawn irrigation.  A little added nitrogen in whatever form you like will help a lot.  The top is covered with a scrap of landscape cloth and tied down.  It sits in full sun as I am operating under the theory that thermophilic bacteria do not know why it is hot, and they are unaware that they lack the 1.5 feet of insulation they would have in a real compost pile.  The black plastic does indeed keep the material warm and you can judge your success by how rapidly the volume decreases.  If you want to aerate the leaves, just roll it along the ground for a bit.  When the volume decreases to 50%, you should have something that looks like purchased compost and you can amend your soil or use it for mulch as needed.

I really should emphasize that this is not real composting and I am relying heavily on bacteria and fungi to break down the leaves.  No kitchen waste is added except for rare doses of coffee grounds.  It only works because the leaf particles are so small when the project begins and relatively free of weed seeds.  However, if space is limited and you would like to do something with your leaves besides plunking them for curbside pick-up, leaf mold in a pot is an option. 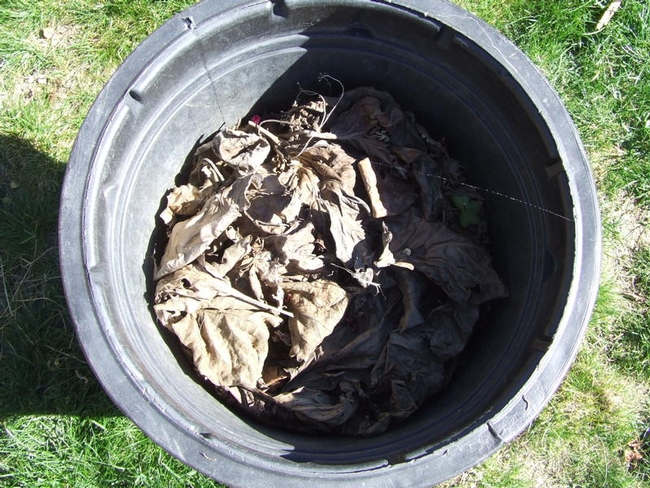 Disclaimer: This article does not express the views held or advocated by UCCE or its affiliates with regard to biodynamic gardening or farming.  It only seeks to introduce the concept of biodynamics to readers as another alternative system of sustainable gardening.

For all of you gardening enthusiasts (which I assume all of you are, since you are reading this blog), it is likely that at some point, you have come across the term “biodynamic” gardening or farming.

Biodynamic gardening/farming is usually regarded as one of the earliest organized systems of organic gardening, emphasizing the interrelationships between soil, plant and livestock management (i.e., the garden or farm is regarded as an organism).  The foundation for biodynamic gardening or farming arises from a series of lectures given in 1924 by the Austrian philosopher, Rudolf Steiner, to farmers seeking his assistance.  Perhaps the defining feature of biodynamic gardening/agriculture and what people find most intriguing, is the use of what is known as “preparations,” (of which there are nine (9), divided between field and compost preparations) which generally consist of manure and/or specific flowers/herbs fermented in a vessel such as a cow horn or the bladder of a red deer/elk, as applicable.  The preparations are typically diluted with water, stirred in an exacting manner for a specific period of time, and then sprayed onto a field or compost to stimulate plant growth, as appropriate, and microbial activity.  Although these preparations sound esoteric and inaccessible to the average person, people seeking to incorporate biodynamic methods in their garden, may purchase preparations from biodynamic trade organizations and/or other biodynamic gardeners and farmers.

The popularity of biodynamics has gained steam in the mainstream, as many wineries, both local (some even in Napa and Sonoma Counties!) and abroad, have adopted such practices.

I have a confession to make…I love my worms.  This relationship began years ago, when I thought it would be fun for my kids to get a pound of red wrigglers (Eisenia fetida) in the mail and begin learning about composting.  Fourteen years later, I’m still going strong.  I love my worms because they’re easy, odor-free, and need little attention.  As long as the bedding remains moist, worms can survive for weeks without any fresh scraps.  Worms are the ultimate recyclers, eating all my kitchen scraps and leaving “black gold” (a nutrient-rich compost), made in about 60 days. The worm castings are much higher in available nitrogen, phosphates, and potash than your average topsoil.  Just this weekend, I used the castings to: top dress my houseplants; potting medium for transplanting; added to planting holes for young seedlings; and brewed some “compost tea” to use as a liquid fertilizer.  Every time I water, organic fertilizer is delivered to the roots without any danger of over fertilizing or burning. If you want to learn more about worm composting, I suggest reading, “Worms Eat My Garbage” by Mary Appelhof.  This book is very informative and a great place to start learning about vermicomposting (worm composting).  An Internet search on ‘red wrigglers for composting’ you will find many informative sites with will information ranging from where one can buy red wrigglers as well as instructions for building and maintaining a worm bin.

I can say with great confidence, if you give worm composting a try, you too, will develop a strange fondness for these amazing composters!