2019 SODBlitz shows Sudden Oak Death on the rise in California

Sudden Oak Death (SOD), a serious exotic tree disease, threatens the survival of tanoak and several oak species in California. Currently, SOD infects trees in 14 coastal California counties, from Monterey to Humboldt. The disease, which was estimated to have killed over 50 million oaks and tanoaks over two decades, has changed the coastal forests composition in Northern California and Southern Oregon.

Though SOD occurs in patches, the overall infection area continues to grow with each passing year. Researchers had previously discovered that Phytophthora ramorum, the pathogen that causes SOD, most often spreads on the leaves of infected California bay laurel and tanoak. Forest managers can use proactive methods for controlling the disease — including sanitation, chemical treatments, and the targeted removal of bay trees — but such tools are preemptive in nature, only useful before oaks and tanoaks are infected. Timely detection of the disease in these species is therefore critical to slowing the epidemic. With this in mind, UC Berkeley joined with over 30 local organizers in 2019 to assemble 25 SOD Blitzes staffed by trained volunteers. More than 400 volunteers were taught to identify SOD symptoms and to carefully collect symptomatic leaves from California bay laurels and tanoaks. Armed with this training, the teams surveyed 16,227 trees across 16 California counties, collecting approximately 9,000 leaves from 1,732 symptomatic trees. Samples were sent to the UC Berkeley Forest Pathology and Mycology Laboratory for processing and analysis.

The benefits of SOD Blitzes are becoming increasingly clear. Importantly, they educate the community about Sudden Oak Death, getting locals involved in detecting the disease while creating detailed maps of infected areas. Analyses of these maps help forest managers figure out where proactive measures, such as chemical treatments or tree removal, most effectively stop an infestation. All results from the data collection are made publicly available on SODBlitz.org, SODMap.org, and on the SODmap mobile app available at the Apple Store and at Google Play. (Results can also be accessed directly on the UC Berkeley Forest Pathology and Mycology Laboratory website.)

Using the app allows anyone to estimate the risk of oak infection, specific to their current location. While standing next to a tree of interest, a person can tap the app's “RISK” button and determine whether an oak is in danger of contracting SOD. In addition, results meetings and treatment training workshops will be held for the public in various Bay Area locations during fall 2019.

Matteo Garbelotto, UC Cooperative Extension specialist and adjunct professor in the Department of Environmental Science, Policy, and Management, has led the SOD Blitzes for 12 years. The program enrolls approximately 500 volunteers yearly to canvas California woodlands for symptoms of SOD.  Results of the surveys are made available nearly in real-time, immediately after completion of the lab analysis.

“We estimate that as many as two to three million people may have accessed the SOD Blitz results to determine whether trees on their property may be at risk,” Garbelotto said. “This is a huge success and shows the great societal value that citizen science has, and it highlights the importance of collaborating with volunteers on issues that are relevant to safeguard trees that are an important part of California's natural heritage.”

Across the state, the number of trees infected with SOD, along with the estimated SOD infection rate, has almost doubled since 2018. In some areas, infection rates were as much as 10 times higher than the previous year. These results suggest that the overall risk of oak infection by SOD is rising.

Spikes in the estimated SOD infection level at certain locations are particularly noteworthy; for example, from 1 to 12 percent in the western part of the East Bay between Richmond and San Leandro, including distinct outbreaks discovered in El Cerrito, Kensington and Berkeley. The western slopes of the Santa Cruz Mountains in San Mateo County have also seen an increase in SOD infection rate (from 6 to 18 percent), which may make safeguarding recreational venues and ecologically important forest sites more difficult. In Sonoma County, the 2019 SOD infection rate was approximately double that of 2018, and in the same timeframe, Napa saw a fourfold increase in detection. Peninsula towns between Redwood City and Los Altos Hills had a very high infection rate (21.6 percent) with an expansion of outbreaks to the east and north.

Some additional key results that came from the 2019 SOD Blitzes include:

A sampling of other noteworthy 2019 SOD Blitzes results follow. More results are available on the websites and app:

The SOD Blitz program was funded in part by the U.S. Forest Service's State and Private Forestry Organization and by the Midpeninsula Regional Open Space District. It was also made possible by a collaboration with the California Native Plant Society, CalFire, the Humboldt/Del Norte and Sonoma County UC Cooperative Extension, the Sonoma County UC Master Gardeners, the U.S. National Parks, California State Parks, the East Bay Regional Parks, the San Francisco Public Utility Commission, Mid-Pen Open Space, the UC Santa Cruz Arboretum, Santa Cruz Open Space, the Santa Lucia Conservancy, the Karuk and Hoopa Nations, the Mendocino Botanical Garden, the City and County of San Francisco Parks and Recs Office, and Strybing Arboretum. Many individuals, who have generously devoted their time and efforts, have been pivotal for the existence and success of the program. Humboldt County tanoak trees that have succumbed to sudden oak death.
Thirteen years after sudden oak death was first detected in California, the disease's range in northern coastal areas of California and southwest Oregon continues to grow, according to a report by Michael Joyce on Jefferson Public Radio.

"For me, the challenge is communicating to the public the disease has not gone away; in fact, it's actually getting substantially worse," Valachovic said.

Sudden oak death is caused by the pathogen Phytophthora ramorum. Currently less than 2 percent of Humboldt County's 2.25 million acres of forest are impacted by sudden oak death. But the average annual rate of expansion per year is 3,500 acres, Valachovic said. One challenge related to containing the disease is the structure of California forest agencies.

"The wildlands of California don't have a single agency that's responsible for controlling invasive introductions," she said. "Secondarily, there is no funding source that is set aside to manage these kind of epidemics. And so everything is piecemealed together: piecemealed responsibility, piecemealed in funding to address these issues."

Furthermore, Forest Service funds can only be used for monitoring, containment and education.

Joyce concluded the story with a question: "How will we learn more about this disease that is spreading through our forests at a clip of about 5 miles per year?" Drought is slowing the spread of sudden oak death "If we had one more year of drought, it would really be ideal," said Matteo Garbelotto, UC Cooperative Extension specialist in the Department of Environmental Science, Policy and Management at UC Berkeley.

The article said Garbelotto isn't hoping for more drought, but evidence shows that the drought is helping reduce SOD infection rates and in some cases is curing infected trees, "because the pathogen dies."

Each spring, the UC Berkeley SOD lab hosts a "blitz" to gauge the spread of Sudden Oak Death. Volunteers fan out across areas susceptible to SOD and collect leaf samples for analysis.

In the Cloverdale area, where an outbreak was confirmed last year, none of the trees sampled had the disease this year, the article reported.

"I would say it is there, but we just didn't find it," Garbelotto said.

A Sudden Oak Death "Blitz" planned for Sonoma County June 15-16 will prepare local residents to spot infected plants, collect samples from their neighborhoods and submit them for laboratory testing, reported the Kenwood Press.

The session is hosted by UC Cooperative Extension Master Gardeners and Matteo Garbelotto, UCCE specialist in the Department of Environmental Science, Policy and Management at UC Berkeley.

Trees susceptible to sudden oak death include California bay laurel, tan oak, live oak, black oak, canyon live oak and shreve oak. After the laboratory analysis is complete, Garbeletto will schedule a return visit to discuss the findings of the survey and provide guidelines for action.

"If the disease front is 100 yards away, then one needs to decide whether some of his oaks should be protected," Garbeletto said. "For oaks up to 30 inches in diameter, removal of small and medium size laurels for a 10-yard radius around the oak trunk plus the application of AgriFos on the bark each year or every other year will protect the oak."

The information collected by the citizen scientists will also be added to Garbelotto's OakMapper website, a portal where SOD appearance in California is monitored. 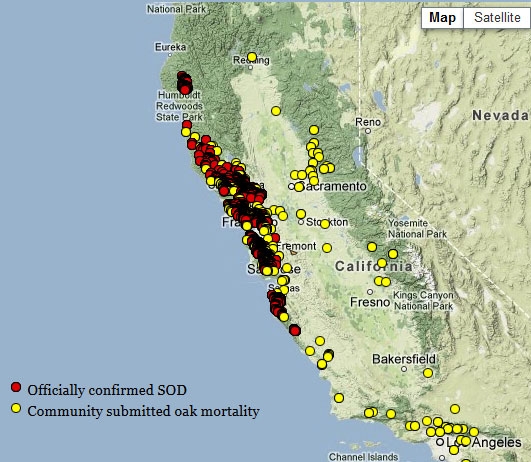 An image from the Oak Mapper website (oakmapper.org) where citizen-submitted scientific data is collected.

"This outreach is really important because it not only teaches people how to look for the disease, but it also helps them to monitor for it in their community, allowing them to identify new outbreaks quickly," said Matteo Garbelotto, UC Cooperative Extension specialist in the Department of Environmental Science, Policy and Management at UC Berkeley.

Sudden Oak Death is caused by Phytophthora ramorum, a microbe that came to California from overseas. The disease has killed more than a million trees in 14 coastal counties from Monterey to Humboldt. 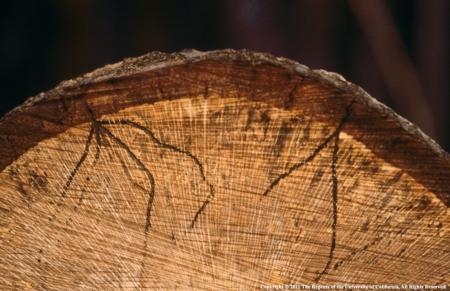 In this cross-section of a coast live oak killed by sudden oak death, the black-stained tunnels of adult ambrosia beetles can be seen extending into the wood.