Jeff Thompson, California Trout's executive director, does a little fly fishing on the McCloud River. He played a crucial role in establishing the organization's partnership with UC Davis to ensure that research, teaching, and outreach on wild trout, salmon, and steelhead will continue for many years.

California once teemed with millions of native salmon, trout and steelhead. The state has 31 distinct types of these iconic, majestic fish. But decades of degradation to aquatic habitat has depleted their numbers in many areas of the state. According to a report by UC Davis fisheries professor Peter Moyle and colleagues, 20 of these fish species are in danger of extinction within the next century. They are important species not just for the recreational or commercial benefits they afford, but also because they are a direct reflection of the health of the environment.

“Large self-sustaining populations of native salmon and trout are found where streams are in reasonably good condition,” Moyle wrote in his 2008 report, “SOS: California's Native Fish Crisis.” This report was commissioned by the conservation organization California Trout (CalTrout), which exists to support conservation science, education, and advocacy efforts to protect California's water resources and fisheries.

Moyle, whose academic home is the Department of Wildlife, Fish and Conservation Biology at UC Davis, is no stranger to CalTrout. He is the foremost authority on California's native freshwater and anadromous (sea-run) fishes and has been a leader in research and conservation efforts. His research has provided the core science essential to statewide conservation planning for freshwater and estuarine native fishes, especially salmon and trout. Graduate students who studied with Moyle now occupy many top-level fish ecologist and management positions in state and federal agencies, as well as key nonprofits like CalTrout. A Russian River steelhead gets released back into the waters of this important North Coast waterway.
“Peter has been an invaluable resource and instrumental in establishing such a strong scientific foundation in our work,” said CalTrout's executive director Jeff Thompson.

In May of this year CalTrout and UC Davis announced the formal creation of the Peter B. Moyle and California Trout Endowed Chair in Cold Water Fishes. The endowment will provide crucial support for the chair holder's scholarly activities, teaching, and public service involving cold water fish and aquatic ecosystems. He or she will teach department courses, mentor graduate students, conduct research and outreach, and provide leadership in the conservation of cold water fishes and their ecosystems. The university recognizes that salmon, trout, and steelhead are the major drivers of many conservation efforts and will have the highest priority in the chair's program.

Most of the contributors to the endowment are CalTrout board members such as Nick Graves. He and his wife, Mary, explored many trails and trout waters in the Sierra Nevada over the years and have enjoyed larger rivers flowing from the Trinity Alps, Mt. Shasta, and the Siskiyou Mountains. “The opportunity to create a scientific chair whose research targets California waters, in perpetuity, is a comforting thought,” Graves said.

“I have worked with the organization since its earliest days and have always admired the dedication of its members to aquatic conservation,” Moyle said. “I am biased, of course, but I think CalTrout has made a very smart investment in the future by creating an endowed chair.” You don't have to dig too deep into the scientific literature and popular media to find perspectives on threats posed to biodiversity in California and around the globe. Two UC Davis scientists in the Department of Wildlife, Fish and Conservation Biology have published fresh insights into endangered species in recent months.

Peter Moyle
Peter Moyle, professor in the Department of Wildlife, Fish and Conservation Biology, is a renowned expert on California's native fish. He used the occasion of the 40th anniversary of the passage of the federal Endangered Species Act (ESA) in December 2013 to size up how the act influenced his own research and how some of California's aquatic biota have fared.

After passage of the ESA, Moyle and his graduate students initially searched for three species they suspected were in trouble: Modoc sucker, rough sculpin and bull trout. They found the sucker in trouble but easy to protect, the sculpin reasonably secure, and the bull trout near extinction in California. It has since vanished.

"As an untenured professor then, I thought it a bit risky to base a career on finding rare fish," Moyle wrote in an opinion piece published in The Sacramento Bee. “So I also undertook a study of Delta and longfin smelt, which at the time were two of the most abundant fish in the Sacramento–San Joaquin Delta.”

Moyle began a monthly sampling program to keep track of smelt populations and other fish in the Suisun Marsh. A few years later smelt counts dropped dramatically. The data eventually led to the U.S. Fish and Wildlife Service listing the Delta smelt as a “threatened” species under the ESA.

His ongoing research has recorded a statewide decline of most native fishes. With other researchers, Moyle has just completed detailed accounts of the biology and status of more than 60 native fishes — all potential candidates for ESA listings. This study will soon be released by the California Department of Fish and Wildlife.

“Most of our recommendations for preventing extinctions call for more and better water for the fish, or at least for protecting existing water they depend on,” Moyle said. “Funny how it almost always comes down to fish needing water.

“The Endangered Species Act sets a high standard in this regard because it not only forbids extinction; it also mandates recovery of each species to a more sustainable state.”

Moyle's opinion piece can be viewed in its entirety here. Aaron Lotz
Aaron Lotz is a postdoctoral scholar who has previously worked with other UC Davis scientists in the development of conservation and management plans for reptiles and amphibians in California. Recently he was involved in a study published last fall in the journal Ecology and Society on the social and ecological predictors of global invasions and extinctions.

The researchers analyzed data from 100 countries, representing 87 percent of the world's population. They examined 15 social and ecological variables, such as tourism, per capita gross domestic product, water stress and political stability. The study showed that as human life expectancy increases, so does the percentage of invasive and endangered birds and mammals.

“It's not a random pattern,” Lotz said. “Out of all this data, that one factor — human life expectancy — was the determining factor for endangered and invasive birds and mammals.”

New Zealand, the United States and the Philippines had among the highest percentages of endangered and invasive birds. The study has been reported in the Los Angeles Times and other news media. Read more about the study's findings in our news release here. The journal article can be viewed here. Authors of a newly published water policy book say a new approach is needed to manage California’s aquatic ecosystems, according to a Public Policy Institute of California news release about the publication.

Recommendations include moving away from the current strategy, which aims to save one species at a time under the federal and state Endangered Species Acts. Instead, a broader approach would create better conditions for many species and address the multiple causes of ecosystem decline.

Wide-ranging water policy reforms are detailed in Managing California’s Water: From Conflict to Reconciliation, an in-depth look at the state’s water management challenges. The authors include Richard Howitt, professor and chair of agricultural and resource economics at UC Davis, Jay Lund, director of the Center for Watershed Sciences at UC Davis, and Peter Moyle, associate director of the UC Davis Center for Watershed Sciences.

The authors say that today’s system of water management, developed in previous times for past conditions, is leading the state down a path of environmental and economic deterioration.

"We’re waiting for the next drought, flood, or lawsuit to bring catastrophe,” the news release quotes co-author Ellen Hanak, senior fellow at PPIC. "But if we take bold steps now, we can move from an era of conflict to one of reconciliation, where water is managed more flexibly and comprehensively, to benefit both the economy and the environment.”

The report's suggestions were not met with unanimous support. The Association of California Water Agencies issued a statement yesterday complimenting the authors for bringing attention to the issue, but adding that the report contains "plenty to agree with and plenty to debate."

Release of the report was widely covered by the news media, including: 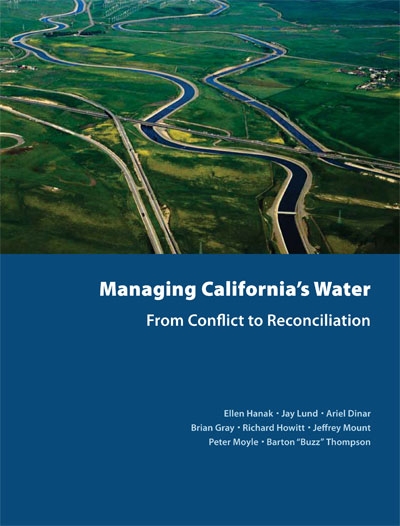