Annie Spiegelman, author of the gardening book "Talking Dirty" and a Master Gardener for UC Cooperative Extension in Marin County, wrote an opinion piece published today in the Huffington Post that mocked CDFA's and USDA's past efforts to eradicate the Light Brown Apple Moth in California.

The author seemed particularly incensed by aerial spraying of pheromones, which was part of the eradication program. In fact, the story was posted with a photo illustration showing a crowded Santa Cruz Boardwalk and beach with a plane releasing a huge white cloud overhead.

In her article, Spiegelman questioned why, during an immense fiscal crisis, $89.5 million was spent to eliminate from the state what she referred to as a "garden variety" and "humdrum" brown moth.

"So I clipped on my Master Gardener trowel-shaped lapel pin and gave the senior entomology faculty at the University of California, Davis, a jingle to see why my tax dollars were being used to stamp out the lackluster 'Light Brown Apple Moth," Spiegelman wrote.

In their letter they said data showing the moth would become more important than other pests already in the state are unconvincing, and there is no scientific evidence that mating disruption is capable of eradicating any insect population.

In a conversation with Spiegelman, Carey reiterated the point that LBAM is not a serious pest.

"And even if it was a more serious pest, there is zero chance to eradicate it," Carey was quoted in the article. "Eradication is not possible because you're not eradicating an LBAM population but you're trying to eradicate 100,000 LBAM populations. There are millions of pockets of these and each pocket has a separate population."

"LBAM will eventually be considered an occasional pest that growers need to be aware of and one, which on occasion will require intervention. It seems to be no greater a threat than a suite of other insect pests that already occur locally," Zalom was quoted.

USDA scientists released 3,000 sterile light brown apple moths yesterday in a Carneros vineyard, according to an article in the Sonoma Index-Tribune. The scientists hope that flooding the environment with sterile moths will prevent females from mating with normal moths and producing offspring.

Reporter Emily Charrier-Botts wrote that UC Davis entomologist James Carey does not expect the program to be successful. He said releasing sterile insects has eradicated only one pest in history - the screw-worm fly. (Screw-worm fly maggots, a livestock pest, feed on living mammal flesh after a female fly lays eggs on a superficial wound, according to CDFA.)

The USDA scientist overseeing the light brown apple moth program, entomologist Gregg Simmons, said the pilot project will help officials determine whether sterile moths could be used to combat infestations across the state.


"The goal is to drive insects to manageable levels. As part of the integrated pest management strategy ... eradication may be achieved," Simmons was quoted. 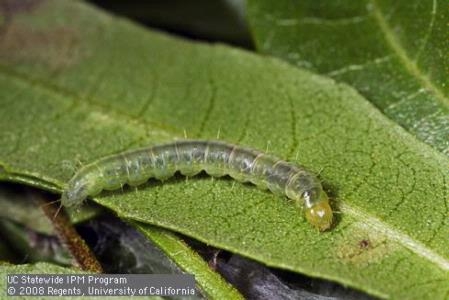 LBAM eradication program not based on sound science, panel says

A panel of 10 scientists, economists and USDA employees released a report yesterday that said the USDA's characterization of light brown apple moth as an "invasive threat" was correct, but the federal agency didn't back up the assertion with sound science, according to an Associated Press story.

The panel, convened by the National Academy of Sciences, includes UC Berkeley entomologist Nicholas Mills. He acknowledged in the article that assessing the potential threat of an invasive species is a very difficult thing to do, and expressed concern about USDA's information gathering efforts.

Opponents of the USDA's eradication plan feel the agency has overblown the threat and put people and animals at risk by spraying pheromones meant to prevent LBAM mating over coastal communities.


According to the article, officials currently are working on eradication by setting out sticky traps baited with moth pheromones and spraying only in inaccessible areas. 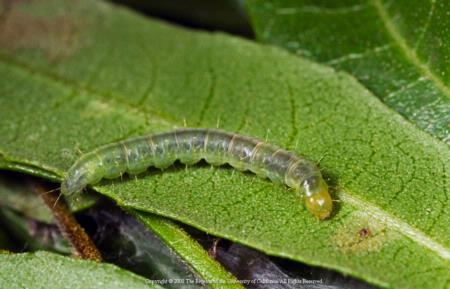 Even as California's focus has been on its stagnant economy and the state budget fiasco, the light brown apple moth is still fluttering in the background. Early this month, the San Joaquin County agricultural commissioner announced the discovery of LBAM in a Manteca trap; a second moth was found in Manteca last week, according to a report published on the KSWB Channel 8 Web site.

Meanwhile, two UC scientists are saying the CDFA's LBAM eradication test scheduled for August in Napa and Sonoma counties is unnecessary and destined to fail, according to an article in the San Jose Mercury News.

"Even conceding that the LBAM infestation is serious, and I don't, you have to pick your battles. This one can't be for eradication," Carey was quoted. 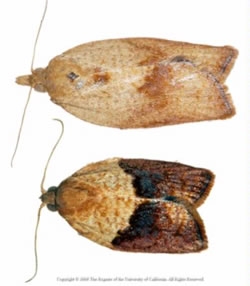 Santa Cruz UC Cooperative Extension farm advisor Mark Bolda reported in his blog, "Strawberries and Caneberries," that a local blackberry farm sustained severe damage from the Light Brown Apple Moth. According to Bolda's report, 20 percent of the crop was lost.

"This information is being provided in the interest of emphasizing to the grower community that this pest is not only a regulatory problem now, but is capable of becoming an economic problem as well," Bolda wrote.

On Monday, a story about the LBAM infestation in blackberries appeared in the Santa Cruz Sentinel. It said USDA inspectors discovered the problem in May, and it came to light after an "agricultural official posted it on his blog earlier this month."

Reporter Donna Jones noted that she was unable to reach Bolda for comment on Monday. The Santa Cruz Sentinel story quoted USDA spokesman Larry Hawkins as saying the LBAM infestation on the blackberry farm is a "unique situation."

"We've seen large numbers of light brown apple moth but before now there has not been noticeable damage. Now there is. In the case of this particular field over in Santa Cruz (County), the grower is not being able to market a substantial amount of the fruit. That's economic damage," Hawkins was quoted.

I was able to reach Bolda this morning. He said his blog is becoming a useful conduit of information to his clientele.

"I can include color pictures and I can post information immediately," Bolda said. "Our newsletter won't come out for two months and the pictures will be black and white."

The blog also permits Bolda to track his readership through Google Analytics, which tells him where his readers are located, how long they looked at posts and which posts are the most popular. "It helps me address the needs of the audience," he said.

The blog also offers the opportunity for dialog. Bolda's LBAM post generated several comments, including a lengthy one that expressed skepticism about CDFA's LBAM eradication efforts.

"I don't want to get into long drawn-out fights," Bolda said. "I do monitor the comments. But there are different opinions and I think they could be a good source of information." 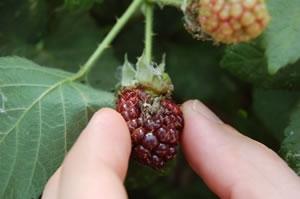