The popular morning television program "Great Day," which airs daily on KMPH Channel 26 in Fresno, featured the work of scientists at the UC Kearney Agricultural Research and Extension Center in six live segments during the five-hour program this morning.

See clips of the interviews in the one-minute video below:

The new director of the UC Kearney Research and Extension Center, Jeff Dahlberg, shared ideas for the future of the research station in this week's Reedley Exponent.

Dahlberg told reporter Ashley Testa-Burk he is interested in developing 'Centers of Excellence' at Kearney to create a globalized focus spanning county, regional and state lines to benefit farmers across the nation.

“It's much easier to get any kind of federal grant if you have multi-disciplinary, multi-state projects,” Dahlberg was quoted. “So I think by perhaps developing these centers, it might give us a cohesive unit that could actually approach the new federal structure of funding for agriculture.”

Dahlberg also discussed plans for using solar technology at KREC to demonstrate how farmers could reduce their environmental footprint.

“I would like to potentially develop a center for on-farm green technologies in which we could become a demonstration and research site for different technologies that farmers could use to become 'greener,'" he said.

In the article, Dahlberg recognized the profound impact research at Kearney has already made on California agriculture.

“One of my jobs is to get out there and promote the fact that this station is here and it's doing really good work,” he said. “The research not only benefits farmers in this region, but the people of California and ultimately the people of the country.” 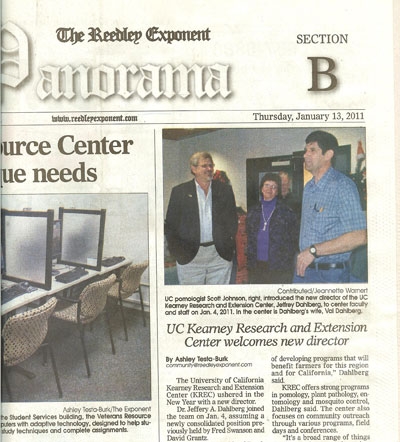