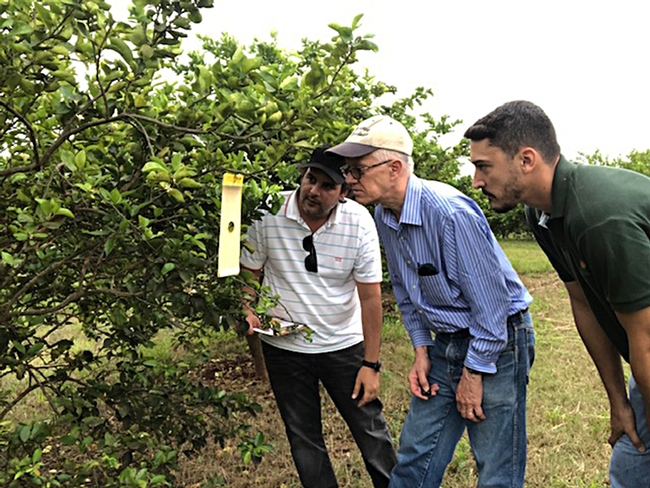 Huanglongbing is a growing threat to California’s citrus industry A symptom of HLB in citrus is the yellowing of leaves on an individual limb or in one sector of a tree's canopy. (Photo: Citrus Pest and Disease Prevention Program)
Huanglongbing (HLB) is a devastating bacterial disease of citrus that is starting to spread rapidly in urban areas of Southern California. The disease is spread by the invasive insect Asian citrus psyllid.

In order to find and remove infected trees before ACP can spread the disease to other trees, UC scientists are focusing research on early HLB detection technologies (EDTs). When infections first start, the bacteria are in just a few leaves. If the sampler doesn't collect those leaves, the disease can be missed. It can take one to two years for the bacteria to distribute itself throughout the tree so this sampling error doesn't occur.

Early detection technologies use whole tree responses to early infections. For example, Carolyn Slupsky, food science and technology professor at UC Davis, measures changes in tree metabolism (its day-to-day chemical function) when it becomes infected. Every leaf on the tree is connected to the tree's metabolism, so it doesn't matter which leaf is collected. This type of test can detect an infected tree within weeks or months after infection instead of years.

Scientists are also studying ways to modify ACP so the insects are unable to spread HLB, and studying the use of conventional breeding, genome editing or genetic engineering to develop disease-resistant citrus. Read summaries of the research here. Young Asian citrus psyllids, called nymphs, produce a white, waxy substance.
Keeping Asian citrus psyllid and huanglongbing disease at bay depends in large part on the active involvement of commercial citrus growers and California residents who have citrus trees in their home landscapes. The UC ANR Asian Citrus Psyllid Distribution and Management website provides detailed guidelines for growers and residents to monitor for Asian citrus psyllid and huanglongbing, and learn about options for reducing psyllid populations and responding to the disease if it's in your area.

View a four-minute video that shows how to monitor for ACP presence in residential citrus:

The city of Riverside is taking steps to protect a 143-year-old Washington Navel orange tree - the tree that parented most navel oranges alive today, reported the Riverside Press-Enterprise.

This month, city workers removed two trees that were planted near the iconic navel orange - a Marsh Grapefruit and another navel, which was planted in the 1940s and doesn't have the historical value. They have built a steel structure over the Washington Navel to support a transparent screen that will keep out Asian citrus psyllid, an invasive pest that spreads the devastating huanglongbing virus in citrus.

The measures to protect the tree were planned by a team that includes scientists from UC Riverside, the Citrus Research Board and the USDA, the article said. The Riverside Washington Navel tree surrounded by open fencing in this 1932 picture. View the Riverside Press-Enterprise to see a photo of the large steel structure that now looms over the tree. (Photo: Department of Interior)

For more information on the photo above, see visit this UCLA Library page.

Dogs enlisted to sniff out disease in citrus trees

The Citrus Research Board is arranging to bring specially trained dogs to the UC Lindcove Research and Extension Center to test their ability to sniff out the devastating citrus disease huanglongbing, reported Bob Rodriguez in the Fresno Bee.

CRB president Gary Schulz is working with the USDA, which is training dogs in Florida to identify trees with huanglongbing soon after the trees are infected. HLB has ravaged Florida's citrus industry. In California, the disease has been found about 800 Southern California backyard trees, but officials have so far managed to keep it out of the state's commercial orchards.

"The USDA has invested million of dollars in detector dogs and they have proven to be a credible diagnostic tool for early detection and screening trees," Schulz said. The USDA has trained dogs to detect huanglongbing disease in Florida. (Photo: USDA)

HLB is spread by Asian citrus psyllids. Psyllids can pick up the the disease from infected trees and spread it to other trees as they feed. Symptoms may not show up in the tree until a year or two after it is infected. PCR (polymerase chain reaction) is the only way to positively identify huanglongbing infection in citrus. The process requires testing of many leaves or branches from the tree and may return a false negative if the samples selected for testing aren't infected, but other parts of the tree are.

Schulz said the HLB-detection dogs will start their California work in the southern part of the state before traveling north.