The Fourth Assessment is broken down into nine technical reports on the following topics:

The technical reports were distilled into nine regional reports and three community reports that support climate action by providing an overview of climate-related risks and adaptation strategies tailored to specific regions and themes.

The community reports focus on:

All research contributing to the Fourth Assessment was peer-reviewed.

UC Cooperative Extension ecosystem sciences specialist Ted Grantham – who works in the Department of Environmental Science, Policy and Management at UC Berkeley – is the lead author of the 80-page North Coast Region Report.  Among the public events surrounding the release of the Fourth Assessment is the California Adaptation Forum, Aug. 27-29 in Sacramento. For more information, see http://www.californiaadaptationforum.org/. Grantham is a speaker at the forum.

Other UC ANR authors of the North Coast Region Report are: On the fifth anniversary of the United Nations' recognition of Dec. 5 as World Soils Day and just in time for the California Department of Food and Agriculture's awarding of $5.23 million in funding to promote the adoption of soil health conservation practices, the California's Healthy Soil Initiative celebrated its first ever California Healthy Soils Week.

For most, that might not sound like a holiday worthy of week-long festivities (a celebration style often reserved for birthdays), but to the passionate folks who've spent the last three years building the nation's leading climate-smart agricultural program, it marks the beginning of a new story of how California agriculture can contribute to feeding the world, saving water and cleaning our air, all while fighting climate change and buffering against its negative effects. Jenny Lester Moffit led a legislative staff briefing on soil health.
As the inaugural year's theme “Healthy Soils = Healthy Lives” implies, soil health and human health are one and the same. So, in an effort to educate Californians on how vital soil truly is, the week focused on “highlight[ing] all the remarkable gifts healthy soils have to offer,” as CDFA Secretary Karen Ross commented.

From Dec. 4 to 7, CDFA, in partnership with a broad swath of stakeholder groups ranging from state organizations to the private sector (Fibershed, including Community Alliance with Family Farmers, California Farm Bureau, CalCAN, CA Resource Conservation Districts, Roots of Change, and Fibershed, hosted a variety of panels, webinars, and tours to better demonstrate what soil health actually is, what it looks like, how to promote it, as well as barriers to adoption and on-farm challenges.

CDFA kicked off the week by unveiling a series of Healthy Soils Information Panels directly outside Governor Jerry Brown's office. The information panels included an Natural Resources Conservation Service-inspired infographic defining healthy soils as a dynamic interface of the four elements, containing approximately 45 percent minerals, 5 percent organics, 25 percent air, and 25 percent water and teeming with life on the order of 100 million to 1 billion individual bacteria per teaspoon. The next few banners featured the major benefits of healthy soils.  Quite simply: More food. Less water-use. Cleaner air. Healthier planet. The last banner brings it all home with a case-study of all-star farmer, Jesse Sanchez, once honored in Washington, DC as a “Champion of Change.” Dec. 5 – the official World Soils Day – was jam packed, starting with a 9 a.m. webcast on Climate Smart Agriculture, followed by a legislative staff briefing led by CDFA Deputy Secretary Jenny Lester Moffitt, and a reception to celebrate the connection between soil and food by indulging in the fruits of California agriculture. The briefing included two discussion panels -- one that featured scientists including UC Cooperative Extension advisors Daniel Munk and Glenn McGourty, East Stanislaus Regional Conservation District agent Jeff Borum and Margaret Smither-Kopperl of the USDA-NRCS Plant Materials Center, and one that featured pioneering farmers, Rory Crowley of Niclaus Nut Company, Michael Crowell of Bar-Vee Dairy, and Bruce Rominger of Rominger Brother's Farms. The growers discussed the benefits and challenges of no-till farming, or conservation agriculture, on their own farms.

The next day turned a bit more hands-on, with California EPA and CalRecycle helping deliver bags of compost, along with educational materials to legislative offices and with tours taking legislators out into the field -- first to the Recology compost facility, and then to Sierra Orchards where some of that compost ends up. Calrecycle took legislators and stakeholders on a tour of the Recology compost facility in Dixon.

Capping it all off, Southern California got looped into the festivities with a tour of the Urban Farm in Los Angeles and keeping in the urban food systems theme, Sacramento Food Policy Group and ReSoil Sac hosted one last panel and reception at Hot Italian, a local restaurant that sources seasonally fresh, California-grown ingredients and is committed to improving communities and the environment. And it's not just talk, these guys walk the walk with a worm-bin on site to help process their waste into a valuable resource for local growers.

Throughout the week, the message was clear: the California Healthy Soils Initiative is here to stay. And while it might take an internationally recognized holiday or a statewide weekly celebration to remind us, soils are the foundation of life, of agriculture, and their health is inextricably linked to that of our own. As Rory Crowley of Niclaus Nut company reminded us, “Every day is World Soil Day on the farm.” “They lost too much income,” said Glenn McGourty, a UC Agriculture and Natural Resources Cooperative Extension advisor in Lake and Mendocino counties. “They decided they were not going to risk their crop until there is a workable biological control solution to this new pest.”

Meanwhile, other organic grape producers are hanging on to their organic certification and counting on UC ANR researchers to come through with a biological control option soon.

“Organic farmers are spending a couple hundred dollars per acre for organic pesticides,” McGourty said. “They don't want to use them. It takes out beneficial insects and it doesn't even control Virginia creeper leafhopper very well.”

Three leafhopper species are pests of California grapes. Western grape leafhopper is a native insect that's present throughout California north of the Tehachapi Mountains. Several natural enemies keep the pest in check most years. Variegated leafhopper migrated north from the Imperial Valley to Central California in the 1980s, and is established in Napa Valley and other valleys of Napa County. Virginia creeper leafhopper, a native of the northern Midwest, made its way to Northern California in the early 1980s. It migrated southward to the northern Sacramento Valley and Sierra foothills, and most recently was detected in Lake and Mendocino counties, where the population boomed. The scientists believe that, in time, fairyflies in Lake and Mendocino counties will begin to parasitize Virginia creeper leafhopper eggs on their own. But, because of the severity of the situation to organic winegrape growers, they've hatched a plan to help out the natural enemies. This summer, they will be rounding up fairyflies in the Davis area – where they know how to attack Virginia creeper – and bring them to Lake and Mendocino county vineyards.

Beginning in April, Wilson will allow Mendocino area Virginia creeper leafhoppers to lay eggs on potted grapevines. The vines will be transported to Davis, where local fairyflies can parasitize the eggs. The plants will go back to the laboratory in Berkeley so scientists can rear populations of the parasitoids and later release them in Mendocino and Lake county vineyards.

“I just planted the grapevines this month,” Wilson said. “When leafhoppers become active in the summer, we'll start monthly releases. We hope our efforts will take some of the pressure off winegrape farmers soon.”

In addition to the work releasing natural enemies of Virginia creeper leafhopper, UC Agriculture and Natural Resources scientists are implementing an area-wide integrated pest management program in Mendocino and Lake counties. The program – a combination of biological, cultural and chemical controls for this pest – employs:

The Virginia creeper leafhopper pest control program is funded in part by the American Vineyard Foundation. The lengthy article was written in honor of UC Cooperative Extension's 100th anniversary. The organization was formed on May 8, 1914, when President Woodrow Wilson signed the Smith-Lever Act into law.

Rhonda Smith, a UCCE advisor in Sonoma County, said she has seen many changes since she started in 1986.

"In early days, most growers were small, independent farmers," Now most of the people Smith works with are employees of large corporations, many multinational.

In the early days, farm advisors dealt with multiple crops, and the viticultural work and research was primarily focused on improving the culture of vines. Things soon changed. “Increasingly, the trials were associated with grapevine pests, especially exotic pests,” Smith said.

Monica Cooper, UCCE viticulture advisor since April 2009, walked into a big problem when she took her job: the European grapevine moth. She also conducts research with mealybugs and leafroll virus and believes red botch virus and water issues to be important concerns for winegrape growers in the near future.

“I’ve been telling growers that they need to learn to farm without irrigation,” McGourty said.

"We kind of wish every year could be like that. There was enough water, practically no frost protection needed, and no mold, mildew or rot on the fruit," he said. McGourty told reporter Justine Frederickson he usually finds growers to be pessimistic when they begin harvest, but that wasn't the case in 2012. "I even saw one of them break into a smile," he said.

This winter, the grapevines have been enjoying a much-deserved slumber, particularly with the recent cold snap.

"They like it," McGourty said of the frigid temperatures, adding that the prolonged cold weather in the Ukiah Valley the first half of January is not likely to cause damage.

"The vines are pretty tough," McGourty said. "They can take a lot of cold, and they can go underwater for weeks (without problems), unless there's any foliage." 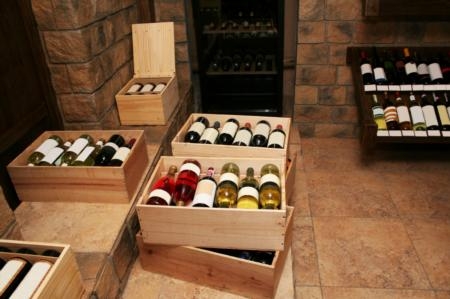