Disappearing bees all the buzz on Sacramento TV

Mussen attributed colony collapse disorder to a combination of factors -- malnutrition, viruses and chemicals, according to the report.

Lopez opened the piece saying a theory about cell phone signals being responsible has been "ruled out," but he did float another theory, that the bees are dying from a virus imported with bees from Australia.

Since everybody loves a mystery, the intriguing case of the disappearing bees is sure to continue to receive media attention.

The agriculture reporter for the Stockton Record, Reed Fujii, pointed out the incongruence of Hollywood's image of agriculture and the real California industry in an article published today.

"If you think farming is the simple life, have another thought," Fujii wrote. "A new listing of federal, state and local agencies that farmers in San Joaquin, Stanislaus and Merced counties may have to deal with runs 46 pages."

The listing he refers to was created by UCCE ag labor advisor Gregory Billikopf. Agencies and Agriculture 2007 (pdf) serves as a directory of public agencies involved with farming. It was last updated in 1993.

"It is not as bad as it looks," Reed quoted Billikopf. The farm advisor pointed out that many of the listings include university agricultural programs and nonprofit groups, such as the California Farm Bureau Federation, Community Alliance with Family Farmers and National Farm Worker Ministry.

Reed wrote that a quick scan of the document provides some idea of the regulatory burden faced by farmers.

"Employment issues might be addressed by the Hour and Wage Division of U.S. Department of Labor, its Occupational Health and Safety Administration, Cal-OSHA (the state version) and California Employment Development Department, not mention the Social Security Administration, Internal Revenue Service and state Franchise Tax Board. 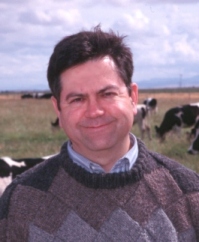 Under the heading "modern life," the Los Angeles Time today covered a UC Web site created by wildlife specialist Robert Timm to track coyotes in urbanizing areas. Here's a synopsis from the article, by Nancy Yoshihara:

"A new website, CoyoteBytes.org, was launched two weeks ago by the University of California Cooperative Extension to gather reports of coyote sightings and attacks from residents of Los Angeles, Orange and San Diego counties and to share information. The goal is to prevent conflict between humans and coyotes."

The development of CoyoteBytes was shared with the media in a Sept. 25 news release by Pam Kan-Rice, assistant director of Governmental and External Relations.

Not only did the the L.A. Times reporter mention "UC Cooperative Extension" in her piece, she also noted "the Division of Agriculture and Natural Resources" in describing Timm's role with UC.

The bulk of the article is presented as a Q&A with Timm, including Why does UC care about coyotes? and Is a single coyote or a pack more worrisome? 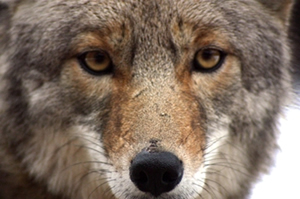 Jim Downing of the Sacramento Bee wrote a story for today's newspaper about the 2007 almond crop. In a nutshell, he wrote that this year's huge almond harvest is erasing fears about disappearing honey bees.

The article says 1.33 billion pounds are expected to be harvested, but that the almonds themselves are about 15 percent smaller. For an explanation, he turned to John Edstrom, UC Cooperative Extension farm advisor in Colusa County.

"Many of us are debating the reasons for (the small amond size)," Downing quoted Edstrom.

Edstrom told Downing that the main variables are weather, water and bees, but it's difficult to say how they interact.

Downing also talked to UC Davis entomologist Eric Mussen, who said California beekeepers are "cautiously optimistic" about the coming year, as most of the state's hives have remained healthy despite the dry spring and summer, which made natural food supplies scarce.

Out of the blue

Los Angeles Times reporter Jerry Hirsch filed a story for today's paper that it seems he pulled out of the blue. Hirsch reported that California farmers are increasingly growing blueberries, a crop that a decade ago was not produced commercially in the Golden State.

"As little as three years ago, the number of acres planted in blueberries in the state was so small that it didn't register with the U.S. Department of Agriculture. Today there are an estimated 4,000 acres of commercial blueberries in the San Joaquin Valley, Central Coast and Ventura," the article says.

Most would agree that a lot of the credit goes to Manuel Jimenez, the small-scale farm advisor in Tulare County. Back in 2001 he already had 30 varieties growing at the UC Kearney Research and Extension Center. His annual blueberry field day continues to be among the best-attended events at the research center.

"There's some real money to be made (in blueberries)," Faber is quoted.

At the end of the article, Hirsh included comments from Faber about the benefits of locally grown blueberries and the challenges associated with producing them.

"What they ship here from South America can't compare to what comes out of a berry patch in Ventura just 24 hours earlier," he is quoted.

California farmers, he said, are finding that blueberries can be a "persnickety crop."

"There is a learning curve," Faber is quoted. "Farmers have to understand that you can't treat it like a lemon." 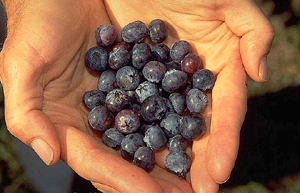