The article said the event, part of the Los Angeles County Fair, has now become one of the premier olive oil competitions in the world.

There were many gold medalists who are repeat winners, among them California Olive Ranch, McEvoy, Round Pond, the Olive Press, Apollo, Pacific Sun and Stella Cadente.

"The state of American olive oil is in a very, very good spot," Vossen was quoted in the article, written by Olivia Wu. "The olive oils we're producing are excellent." 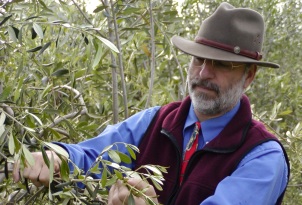 The heat is on.

According to the Weather Channel Web site, temperatures in California’s inland valleys will soar into the triple digits next week. Those valleys include the Coachella, Sacramento and mighty San Joaquin, where much of the state’s agricultural industry is centered. The same geology that created the valleys' fertile farmland fed by snow melt from local mountains helps trap the heat, creating problems of its own.

UC Agriculture and Natural Resources Communicators Network has compiled tips with information from UC experts on coping with high temperatures. Issues run the gamut, from shading your home with trees to protecting outdoor workers and even how high temperatures help olive growers in their battle with the new exotic pest, olive fruit fly.

June seems as popular for retirement as nuptials.

Many people think of June when planning their weddings. This year, for a number of UC Cooperative Extension academics, the early summer month is time to retire from a long and distinguished career.

The four retirement releases I wrote this June represented a combined 111 years of experience with UC Cooperative Extension, and these aren't the only retirements to take place this month. The advisors' stories are being picked up by the media.

The Central Valley Business Times covered Mario Viveros' retirement in its "People in the News" column.

Ken Willmarth's retirement news release was distributed today to his hometown newspapers. It is on the ANR news Web site.

Best wishes to all our new retirees.

Sheep as farmworkers are media darlings.

When I first heard that UC Cooperative Extension farm advisor Morgan Doran would be training sheep to clean up weeds in vineyards, I knew it would be a great story. I personally enjoyed visiting Doran and his cooperators in the study at the beautiful UC Hopland Research and Extension Center, getting the details of the research and writing a piece for the UC Web site and to share with the media.

I have also enjoyed what the media have done with the story. The Central Valley Business Times led their article, published June 2:

"Who knew? It turns out that sheep can be trained to be vineyard workers, say scientists at the University of California’s Hopland Research and Extension Center, south of Ukiah."

Author Joanne Marshall, writing for the June 24 edition of Farm news for New Zealand farmers, compared Doran's research to the effects of drinking too much:

"Whoever said sheep were stupid should think again. If you've had a big night out, drunk too much alcohol and had a terrible hangover do you decide to never go out drinking again? The answer is usually NO. But if you happen to be a sheep, you'll probably know better than to inflict pain and suffering on yourself a second time."

M. S. Enkoji of the Sacramento Bee opened his story, which was printed in the paper last Saturday, like a classified ad:

Perhaps this experience shows reporters can't resist a story with which they can have some fun. 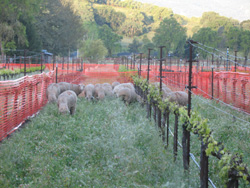 Sheep at the Hopland Research and Extension Center.

The recent rise in gas prices has many folks thinking about biofuels. In fact, in the last week, the Associated Press reported that the push from Congress and the White House for hugh increases in biofuels is prompting the oil industry to scale back it plans for refinery expansions -- which could keep gas prices high for years to come. (AP stories appear in many media outlets and Web sites. Use the seven-day free search with the keyword "biofuel" to find this story.) The article, by H. Josef Hebert, says oil industry executives no longer believe there will be the demand for gasoline over the next decade to warrant billions of dollars in refinery expansions.

As politicians and oil executives debate the issues, and Americans continue paying mightily at the pumps, UC ANR is bringing together experts in Woodland tomorrow to discuss the potential for biofuel feedstock production in California using crops or crop residues. The event involves representatives from biofuel businesses in California, farmers and UC academics.

I'll be attending and taking extensive notes in order to share with the media any conclusions about UC research and outreach projects focused on biofuel feedstock development that the group is ready to share. For that reason, I won't be here to blog about UC ANR in the media, but will bring the blog up to date on Wednesday.