A 4-H member who traveled to Australia this summer wrote a summary of her trip that was published today in the Lake County News. The writer, Kelsy Sills of Kelseyville, along with Kelsi Alexander and 4-H volunteer Sherry Falge were participating in the 4-H International Exchange Program.

Since Kelsey (and alternative spellings Kelsy and Kelsi) make repeated appearances in this story, I thought it would be interesting to check the meaning of the name. According to thinkbabynames.com, it is of Old English origin and means "victorious ship." It is also possibly a place name referring to "island." Eerily, Australia is known as the "island continent." Perhaps this trip was predestined.

Back to the newspaper story . . . . The article said Alexander stayed on a small farm in Simpson, Sills stayed on a dairy farm in Cobden, and Falge stayed on a sheep farm where she helped with the daily chores. All of them also did some traveling.

The trip was part of the Lake County Citizenship and Leadership 4-H Club, which is aimed at keeping older youth in 4-H and designed to prepare future leaders and good citizens.

Three local newspapers in the state today added a few pieces to the mosaic that portrays the depth and breadth of the UC Cooperative Extension program in the media over time.

“I knew two other people who had gone through the program and I went on their Web site to research the course,” Newton was quoted in the article. “The program taught us how to resource information in order to help other people garden, especially, in the area of growing food. They teach us about pest control, fertilizers, seeds, plants, every aspect of gardening.”

Chinese teens get a taste of America
The Solano Times-Herald made a nice feature story out of a 4-H international exchange program that brought a group of Chinese teenagers to Vallejo.

The Chinese visitors are trying some new foods, including hot dogs and pancakes, in their 4-H host families' homes.

Chino paper takes on statewide problem
The Chino News and Review ran a story about dairy farmers' efforts to protect water quality. "In a disturbing trend across the Central Valley," wrote reporter Katie Booth, "dairies have come under scrutiny for their wastewater runoff and effects on water quality."

The reporter spoke to UC Cooperative Extension dairy program representative Betsy Karle. Karle said the problem is being addressed across the state, according to the story.

The article said Karle grew up on a dairy farm, received her master’s degree from UC Davis in 2003 and has worked for the cooperative extension for 10 months. Regarding the three Orland dairies recently cited for wastewater runoff, she said they are "doing their best."

According to the story, Karle explained that infrastructure required of dairies is very expensive and profit margins are at a record low. “[Right now, we are] making sure dairy farms can operate in balance.”

When UC Cooperative Extension was established in California nearly 100 years ago, it aimed to help housewives put up preserves and teach kids how to care for hogs, among other pursuits of typical rural-living, farming families. Though the program has advanced significantly in scientific research, nutrition education and youth development, traditional activities haven't been entirely abandoned.

"A lot of people have been calling me with questions, and I'm here for their calls," Spezzano was quoted.

"As a member of a 4-H market animal project I learn to be disciplined, organized and accomplish goals," Andrade wrote.

The National 4-H Council distributed a news release announcing stepped up efforts to engage youth in science, and indicated that California is one of five states that will lead a national initiative to expand the 4-H2O water conservation program.

The release was picked up in at least two publications, the Centre Daily Times in Pennsylvania and TMCnet.com.

The 4H20 program includes new curriculum in environmental science and the launch of 4-H2Online. California, Kentucky, Michigan, Mississippi, and West Virginia were selected to lead the effort, which is funded by a $1.48 million grant from Toyota.

In the same release, the national 4-H office announced that Oct. 8 will be "National Youth Science Day." The event features a "National Science Experiment" - a designated science activity for youth across the country. Details of the experiment will be announced later this summer.

The news release also noted that 4-H's new science focus will resonate throughout its public service campaign. The campaign includes print and broadcast ads based on the theme: "One Million New Scientists. One Million New Ideas." The goal: Engage one million new youth in 4-H science, engineering, and technology programs by 2013.

A group of UC Cooperative Extension 4-H members in Ventura County who participated in agricultural and natural resource journalism academies produced informative and creative newspaper supplements that were distributed to tens of thousands of Ventura County residents. The supplements are written "by kids and for kids."

The most recent one, "Fish on Your Dish," went to nearly 80,000 residents with copies of the Ventura County Star last month. The supplement includes articles titled "What is Commercial Fishing?" and "Commercial Fishing Operations of the Santa Barbara Channel." Brief features take on the topics of squid, wetfish, sea urchins and many other sea creatures. "Fish on Your Dish" will be available on the Ventura County Web site after June 9.

The tabloid-style newspaper supplements include fun facts, clever graphics and lots of activities. Ventura County 4-H is planning two more journalism academies this summer and fall, the first focusing on marine resources and the second on issues related to food systems, which will lead to additional publications.

The first supplement in the series, "Fields to Fridge: What's Growing in Ventura County," was distributed in March 2007. Through newspaper and other distribution channels, it has reached 200,000 readers. For more details on that supplement, see the UC Delivers article on the topic. 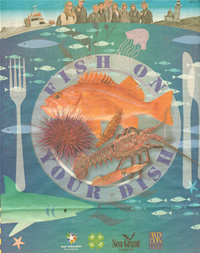