Foothill ranchers' hopes for a wet autumn were dashed in 2013

When spring 2013 passed without a healthy rainy season, ranchers pinned their hopes on good growth in the fall. However rain came late, leaving pastures to wait for warm weather to get grasses growing again, reported Ching Lee in the Sierra Sun Times.

"Things may germinate, but they'll just sit there," said Glenn Nader, UC Cooperative Extension advisor for Yuba, Sutter and Butte counties. "There's not going to be any rapid growth until March — unless we get an unusually warm December."

The state needs successive rain storms this winter to fill the ground with enough moisture to support decent growth next year, Nader said.

In the meantime, ranchers will have to purchase feed, but prices are higher because the drought also pushed down production.

"People can quickly feed themselves into a negative cash flow with today's hay prices," Nader said. "That's why a lot of people are looking at alternative dry matter sources such as corn stover, rice straw and other things, to try and cheapen up those costs." “Farmers have long selected citrus varieties that are low-seed, that have the same kinds of chromosomal rearrangements stimulated by the same thing—there’s natural radiation around all the time and it can affect the trees at any time.”

The advantage of inducing mutations, Roose explained, rather than waiting for the sun to trigger genetic variation, is that it can be targeted toward manipulating one particular feature—a kind of rapid prototyping for agriculture. The radiation accelerates the output of new genetic compositions. Each is then cultivated, screened and tested with the hope that at least one offspring will be reliably superior to its antecedent.

A live fire demonstration will help illustrate the need to clear growth from around structures and to be aware of the growth of Scotch, Spanish and French broom Thursday in the parking lot at 5400 Clark Road, Paradise, Calif. Glenn Nader, UC Cooperative Extension advisor for Sutter-Yuba counties, an expert in livestock and natural resources, will talk about spraying herbicides to control the weeds.

Several studies suggest that eating grass-fed beef elevates precursors for Vitamin A and E, as well as cancer-fighting antioxidants such as glutathione and superoxide dismutase, compared with eating beef from grain-fed animals, says a research review published in the current issue of Nutrition Journal.

"However, consumers should be aware that the differences in (fatty acid) content will also give grass-fed beef a distinct grass flavor and unique cooking qualities," the researchers wrote.

In addition, the fat from grass-finished beef may have a yellowish appearance from the elevated carotenoid content (precursor to Vitamin A).

The research prompted San Francisco Examiner blogger Joshua Horrocks to ponder whether grass-fed beef is the key to cancer prevention. He noted that, in addition to grass-fed beef's higher levels of antioxidants, it has lower concentrations of monounsaturated fatty acids. MUFAs have been linked to a higher mortality rate for women.

The researchers have developed a Grass-Fed Beef Web page with information on the product's health benefits, niche marketing, labeling, cost of production and more. 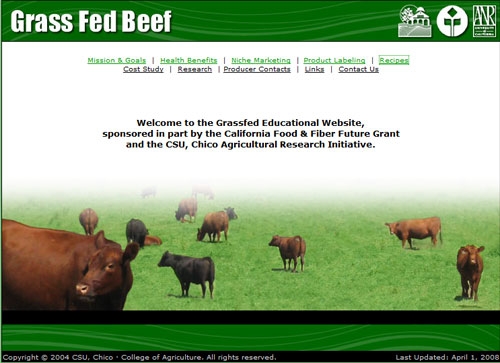