UCCE remembered in story about varmints

Santa Rosa Press Democrat writer Meg McConahy opened a a story about varmint infestations with a cute, if maybe exaggerated, lead. "If you thought flood, fire and mold were the largest threats to your house," she wrote, "you probably have yet to face the menace of a pregnant raccoon."

The lead foreshadowed an anecdote in the story in which a raccoon ultimately led homeowners to hire a crane lift and punch a hole in their roof to get rid of an unwelcome guest. Fortunately, most critter infestations are more easily remedied. On way to face the problem is by downloading information from the UC ANR publications catalog; the URL to the site was published in a sidebar that appeared with the article.

Homeowners may want to research ways to protect their homes from wildlife infestation. Proactive pest exclusion is probably the best way to control the problem. After an animal has set up housekeeping, eradication is more complicated and costly.

Deer, gophers, moles, voles and rabbits are among the animals that can burrow and eat their way through landscapes; raccoons, opossums, squirrels, skunks, coyotes, foxes, bats and rats can cause thousands of dollars of damage to ductwork, insulation and Sheetrock, the story said. 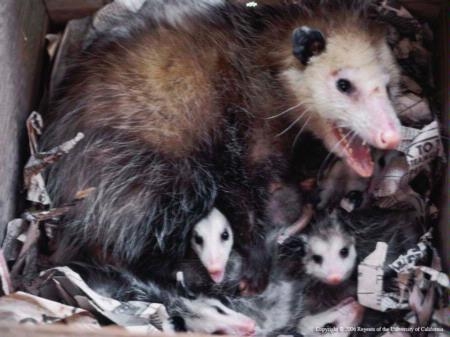 Pacific fishers are at the center of a conundrum. Most people have never seen them, but judging from photos of researchers cuddling the furry creatures, they are adorable. The nocturnal and obsessively shy fisher is related to the mink, otter and marten. They once ranged from British Columbia down through California's Sierra Nevada, but only two native populations remain today -- one around the western California/Oregon border, and one in the southern Sierra Nevada Mountains, according to the Environmental Protection Information Center.

Fishers' preferred home in dead trees and their tendency to move around put them at odds with fire prevention goals, according to a story last week in the Sierra Star. The article was based on a community meeting held by a group of scientists who are working together to protect wildlife and promote forest health. The scientists have formed the Sierra Nevada Adaptive Management Plan (SNAMP).

The event, covered by reporter Jill Brackett, was intended to collect community input on management of the local forest and wildlife.

"It's your meeting," the story quoted Kim Rodrigues, the director of UC Agriculture and Natural Resource's North Coast and Mountain Region whose academic specialty is forestry. "The ultimate purpose is collaboration. You are embarking on this with us."

The story said SNAMP is in the early stages of their "adaptive management loop," and that no decisions were made at the meeting. A follow-up discussion was proposed for October.

In the wake of 2008 fires: Tainted wine and lost habitat

Cooler weather in California is helping firefighters begin to get a handle on fires that have raged in the state for weeks. But concerns over the fires' consequences are sure to continue for months. Two articles over the weekend touched on such issues.

The Wine Spectator magazine raised the spector of 2008 vintage wines being imparted with a smoky character due to the fires.

"There are examples of smokiness from forest fires showing up in wines," the story quoted Roger Boulton, a viticulture and enology professor at UC Davis.

The article, by Augustus Weed, said chemicals in the smoke can coat grapes and be absorbed into the grape skins. The density of the smoke, how long it is in contact with the grapes and how far away the vineyards are from the fires, determines how extensive the effect is.

UC Cooperative Extension farm advisor Glenn McGourty was also quoted in the story. He said the main concern to vineyards from the fires is a dwindling supply of water.

The writer paraphrased McGourty as saying water will not be an issue for the majority of the Mendocino wine industry, which gets its water from the Russian River. But in dry regions like Anderson Valley and Redwood Valley, water supplies are low and it could become a problem.

Tietje noted that the 1994 fire on Highway 41 was so hot and burned so fast that firefighters observed quail flying into the flames and afterwards found the charred remains of deer and mountain lions.

“In the case of catastrophic wildfire,” Tietje was quoted, “animals may be killed directly or must move into adjacent habitat where their chances of making a living are reduced.”