Ag is a key part of California communities' identities

News stories from around the state demonstrate the role of UC Cooperative Extension in helping define California's agricultural "sense of place."

Salinas research corridor
Officials are working together to create a "research corridor" in Salinas to work in concert with existing agricultural and construction technology centers, said Salinas Mayor Dennis Donohue in his state-of-the-city address. "I want to acknowledge the very real and sustained efforts to make a Research Corridor a reality by Dr. Phoebe Helm at Hartnell, Sonya Varyea Hammond of the UC Extension and Congressman Sam Farr," Donahue said, according to a transcript of his speech on the Fox 35 news website. "The City will continue to stand with and actively support their efforts to help move the public sector's role in the future we envision. The marketplace will ultimately move the agenda forward but the public sector plays a crucial role."

Organic agriculture
California is the No. 1 place for organic agriculture in the nation, according to a survey analyzed by UC Cooperative Extension agricultural economist Karen Klonsky. UC Davis news service issued a news tip about the analysis that was picked up widely in the media. The survey found that California leads the United States in the number of organic farms, the amount of land in organic production and in organic sales. California is home to 19 percent of the nation’s organic farms and accounts for 36 percent of the country’s organic sales.

Rural identity
The U.S. census reports that population in Yolo County has grown, but the place maintains its "rural" designation, reported the Woodland Daily Democrat. Government agencies usually identify counties as rural if the population is under 200,000, the story said. Even though Yolo County, the home of UC Davis, topped that number by 849 individuals, it is still considered rural because of the important role of agriculture in the community, county administrator Patrick Blacklock told the paper.

A webinar series produced by an organization of agricultural economists at Western land-grant universities is adding Spanish programming this month, according to a news release distributed today by Washington State University. Webinars are seminars on the Web.

The webinar series in English, called "Ag in Uncertain Times," began broadcasting in June 2009. Past programs programs have included "Operating in risky environments" and "Operating in the face of uncertain markets." All programs are recorded and available on the Western Extension Committee Web site.

The first Spanish webinar, set for Wednesday, March 10, will address management of finances and credit in an agricultural setting. On March 17, participants will hear about business planning and market strategies and on March 24, strategies, tools and resources for selecting and diversifying crops. All sessions begin at 4 p.m. Pacific and can be accessed at http://www.msuextensionconnect.org/aginuncertaintimes/

The Spanish sessions will be presented by a bilingual team led by Ramiro Lobo, small farm program advisor for UC Cooperative Extension in San Diego County. Links to the recorded webinars will be posted on the Ag in Uncertain Times en español Web site after they are presented live. 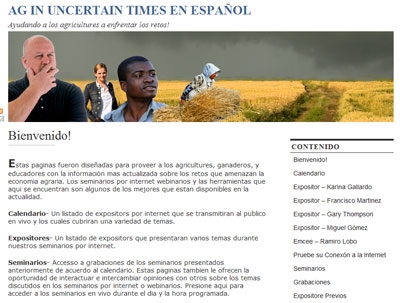