As a child, I enjoyed the mint growing underneath our kitchen window for its fragrance and flavor.  It also was an excellent addition to mud pies and imaginary floral “soups” (and, no, I didn't taste those).  I had some vague awareness that the mint was hardy, although I didn't think about it in those terms.  It had been planted years earlier by some unknown person, wasn't regularly watered, and withstood ravenous deer.  It cropped up year after year.

As an adult, that experience made me very wary about planting mint in my yard now that I am familiar with terms like “aggressive,” “invasive,” and “rampant spreading.”  I kept picturing that mint plant thriving despite neglect.

But the siren song of mojitos, tea, and Turkish-style coffee prevailed.  I've been growing mint successfully in containers for a few years now without it spreading.  Basically, it comes down to two easy concepts: pot and prune.

Mint (Mentha spp.) is easy to grow, which also makes it difficult to control.  It is a perennial herb that prefers rich soil, ample water, and afternoon shade.  It spreads sideways by runners, or more specifically, rhizomes (horizontal underground stems). While an 18” deep barrier might help contain mint planted in the ground, the rhizomes still may escape eventually and so I won't risk it. To avoid the plant's rampant spread, plant mint in a container and place the container on an impervious surface, such as a patio or paver to ensure that the plant doesn't spread through the hole in the bottom of the container.  (The water should still be able to drain out.)  Some references say that it will suffice to place the container on a gravel surface, but I won't risk that either.

There are many interesting varieties of mint.  I've planted both spearmint (Mentha spicata) and chocolate mint (Mentha × piperita f. citrata 'Chocolate').  I'd like to try peppermint (Mentha piperita), but it doesn't do as well in a hot, dry environment as spearmint.  While the chocolate mint is a fun, fragrant novelty, we use the spearmint much more.  If I had to pick just one mint, I'd pick spearmint for its ability to grow well in our county and its versatility of use. 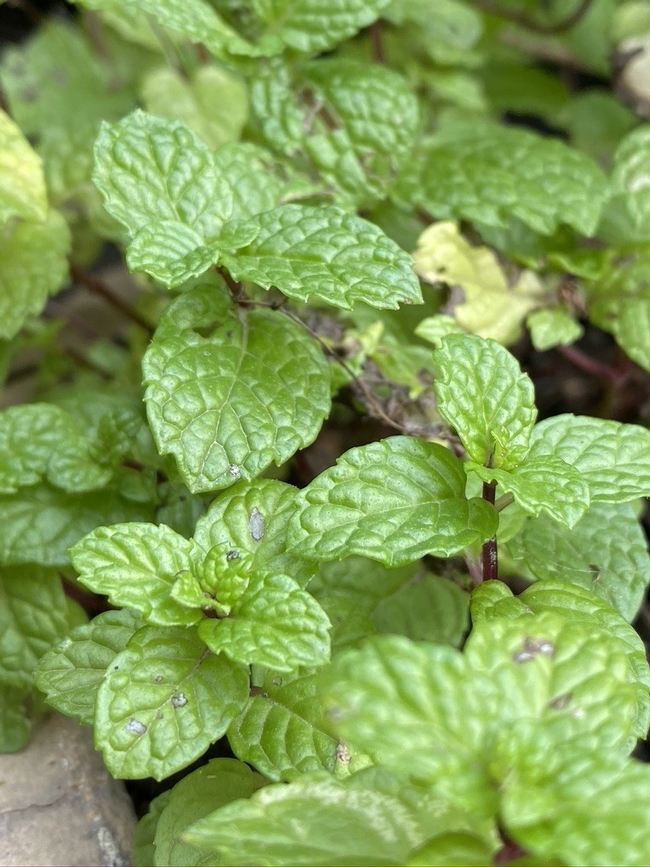