Shoveling isn't usually my idea of fun, but after months of rain, I was so excited to get into the garden and start prepping the raised vegetable beds for spring and summer.  On a (finally!) recent sunny weekend, my husband and I headed outside to mix in some compost and top off the beds where the soil had settled.  As my husband started to turn the first bed, he asked, “what are these white grubs?”  And then he observed, “there are a lot of them.”  And the final blow, “it's like something out of a horror movie.”

Oh no!  We have grubs!  To be more specific, we have masked chafers, commonly known as “white grubs” (Cyclocephala spp.).  These beetle larvae are white with a brown head, up to 1 inch in length, and have bristles on the underside of the posterior end of the abdomen.  Put simply, if you find a large c-shaped white grub, it's probably a – you guessed it – white grub.  The species produce one generation each year and the grubs overwinter as mature larvae.  In spring and early summer, the white grubs pupate 3 to 6 inches deep in the soil. The adult beetles variously referred to as scarab beetles, May beetles, or June bugs are about one-half inch long and are golden brown with a darker brown head. The adults are attracted to lights at night in the summer, mostly from mid-June through July.

Identifying the masked chafer was confusing because most references discuss how the grubs are attracted to turf grass.  The masked chafer grubs feed on roots, resulting in irregular dead patches and resembling drought stress even though there is sufficient irrigation.

We removed our turfgrass three years ago, so I'm not sure why the masked chafers are in our raised beds.  Nonetheless, despite their primary reputation for being a turfgrass pest, they will feed on the roots of weeds, vegetable transplants, and ornamental plants.  The most severe injury to plants is caused by large grubs feeding on plant roots in the fall and spring.

Masked chafers don't seem to be a serious problem unless there are a lot of them.  In our case, one 4'x3' vegetable bed had about 30 grubs.  That seems like a lot to me!  We've evaluated the various control options, but aren't inclined to try pesticides or nematodes at this point.  According to the UC Master Gardener Program of Contra Costa County, removal is the first line of defense and hand-picking the grubs is the best approach.  (“Grubs in the Vegetable Garden's Soil” (March 12, 2018) at https://ucanr.edu/blogs/blogcore/postdetail.cfm?postnum=26574.)

So my husband dug them out and squished them.  I certainly hope that helps control them.

For information about biological and cultural controls that may help reduce the number of masked chafers infesting turfgrass, see the UC Pest Management Guidelines for masked chafers at http://ipm.ucanr.edu/PMG/r785301311.html.  For information about the use of beneficial nematodes to control grubs, see the UC Guide to Healthy Lawns, Beneficial Nematodes, at http://ipm.ucanr.edu/TOOLS/TURF/PESTS/innem.html.

Apparently, the masked chafer is a blueberry pest as well.  For information about control of masked chafers on blueberries, see the UC Pest Management Guidelines at http://ipm.ucanr.edu/PMG/r57300411.html. 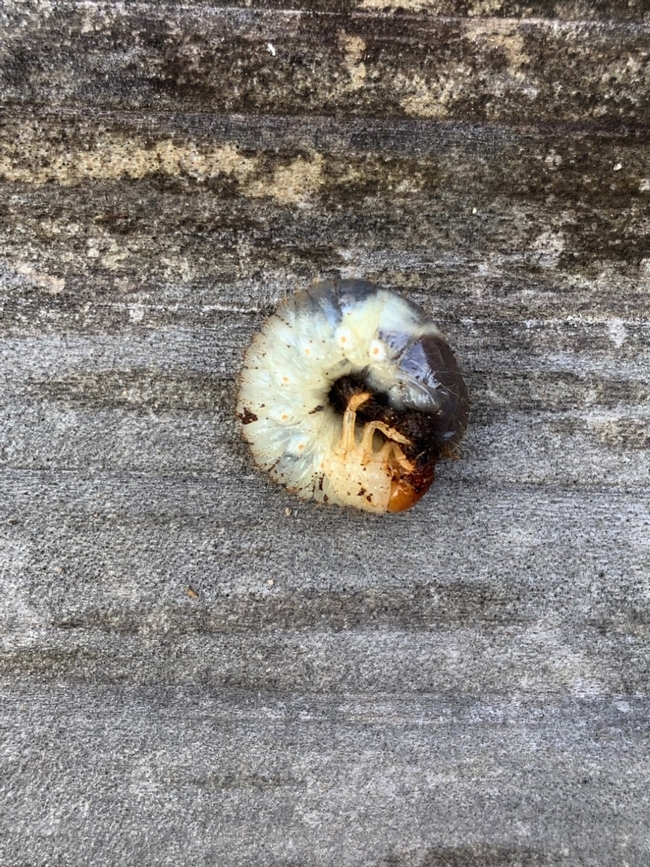 1.
Very informative, Erin. Thanks for "digging deeper" to get us the scoop on this critter. I printed out your blog for future reference. Frankly, I didn't connect the beetles or June bugs to grubs until now.