The competition between farmers and fish for precious water in California is intensifying in wine country, say biologists at the University of California, Berkeley. The researchers found that juvenile steelhead trout are particularly at risk during the dry summer season typical of California’s Mediterranean climate. Of the juvenile steelhead trout present in June, on average only 30 percent survived to the late summer. In years with higher rainfall and in watersheds with less vineyard land use, the survival of juvenile trout over the summer was significantly higher.

The researchers pointed out that salmon and trout conservation efforts have not adequately addressed summer stream flow. Previous studies have highlighted other limiting factors such as habitat degradation and water quality, while this study documented the importance of water quantity for restoring threatened populations. Aerial view of vineyard agriculture in Sonoma County. Vineyards that divert water from streams used by juvenile salmon and steelhead trout could reduce their impacts by storing winter rainfall in small ponds such as the ones seen in this photo. (Adina Merenlender photo)
“Nearly all of California’s salmon and trout populations are on the path to extinction and if we’re going to bring these fish back to healthy levels, we have to change the way we manage our water,” said lead author Theodore Grantham, a recent Ph.D. graduate from UC Berkeley’s Department of Environmental Science, Policy and Management (ESPM). “Water withdrawals for agricultural uses can reduce or eliminate the limited amount of habitat available to sustain these cold-water fish through the summer.

Grantham says he is not suggesting we get rid of vineyards. “But we do need to focus our attention on water management strategies that reduce summer water use. I believe we can protect flows for fish and still have our glass of wine.” Dave Lewis
Fines levied for fish and wildlife violations in Marin County will fund a slate of programs to enhance local fish and wildlife resources and public education programs, according to the Marin Independent Journal.

The funding is being allocated by the Marin County Fish and Wildlife Commission, which is staffed by UC Cooperative Extension director and watershed management advisor Dave Lewis. He reported that reduced state and local allocations resulted in the commission limiting its recommendations for grant disbursements in 2011.

The nine grants, which ranged from $1,140 to the Friends of Corte Madera Creek Watershed to $300 for the Tyee Foundation, which raises and releases salmon in Tiburon, amounted to $7,033 in all. Also, $2,200 was allocated for administrative staff support of the commission. Last year, the panel distributed more than $24,000 to a dozen agencies.

Lewis said the commission gets about 18 percent of fish and game fine revenue to distribute after the state and courts take the lion's share of citation revenue generated in Marin. The funds support projects that promote restoration, sustainable use, management and related educational programs of the fish and wildlife resources in Marin County.

In this latest series of five videos, Drill and Camm Swift, a fishery biologist with the Natural History Museum, are filmed on the bank of the Los Angeles River chatting about the significant impact urban development, channeling, damns and introduction of non-native aquatic species has had on the ecosystem.

No native species still swim in the LA River and many riparian habitats - such as mudflats and wetlands - no longer exist.

"There's actually a big effort right now to do some large scale restoration of the LA River. The City of Los Angeles is heading that up," Drill said on the second video. "It's a long, long process, but they're in the feasibility study phase right now."

The student who produced the series, Mike Cadena, said in a commentary about the video series that joining the biologists on the riverbank was an amazing experience.

"What I was most amazed about was the river's potential for recreation. One of the biologists said that a long time ago there'd been plans to build all sorts of rec. centers and parks all along the river and this really got me thinking about what that would mean to all of Los Angeles," Cadena wrote. 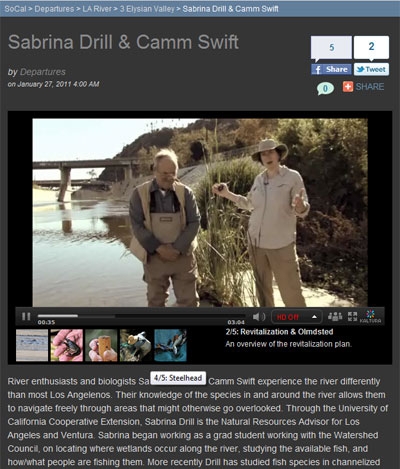