New sustainable ag major is a return to UCD’s roots

A new bachelor’s degree program at UC Davis is meant to gives students an understanding of the social, economic and environmental aspects of farming and food systems, reported Cory Golden in the Davis Enterprise. Some of the lessons taught in the program will harken back to the interdisciplinary courses that have been taught at UCD’s Student Farm for more than three decades.

California and Arizona citrus nursery growers are shifting production of critical plants from the outdoors to ‘indoor protective structures’ to gain protection from the Asian citrus psyllid insect and its primary vectored disease Huanglongbing. The change will require growers to adjust to new pest control techniques. “You’ll likely find extra pests indoors that you haven’t dealt with outside including mites and thrips,” said Jim Bethke, UC Cooperative Extension floriculture farm advisor in San Diego County. “It’s very hard to exclude mites with screening material. The screen can exclude the Asian citrus psyllid, but will not keep out thrips.” 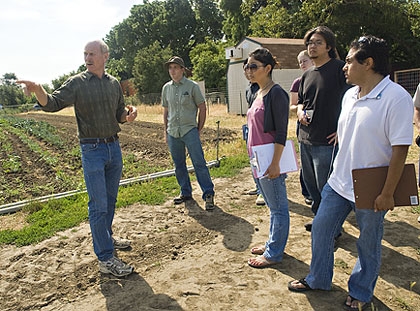 Mark Van Horn, director of the Student Farm, gives a UC Davis class a tour of the farm's market garden.

The 2008 Farm Bill gave organic agriculture a significant boost by increasing funding for organic research from $2 million a year to $20 million, according to an article in the New York Times.

Reporter Jim Robbins outlined some of the research that is underway across the country, opening with work at the UC Davis student farm, where native sunflowers provide a "bed-and-breakfast" for beneficial insects, according to farm director Mark van Horn.

Robbins also described the work of UC Cooperative Extension farm advisor Rachael Long, who has studied bats' role in battling codling moth in walnut and apple orchards. According to her research, bats eat their weight in bugs every night.

“They eat a ton of insects,” Long was quoted. “They also eat cucumber beetles and stink bugs, which affect tomatoes.”

Scientists are continuing their research to identify a blend of systems that will grow food and support the natural ecosystem on the farm and beyond. 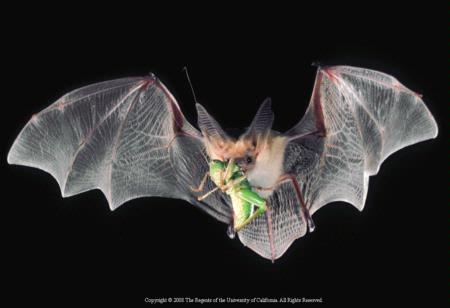